GRCC’s Associate Vice President for College Advancement / Foundation Executive Director Andy Bowne suffered the loss of his mother today and will be out of the office the rest of the week.  Funeral and visitation service information will be posted as it is made available. 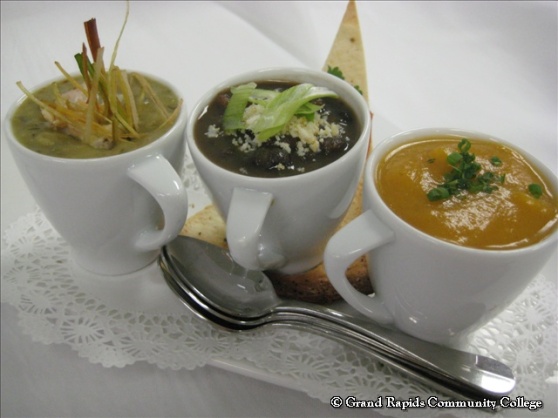 Due to the inclement weather, a number of reservations for lunch today at GRCC’s Heritage Restaurant were canceled.  As a result, the Secchia Institution for Culinary Education would like to entice you to stop by with a free latte or cappuccino with your lunch today.  The students need to practice their skills, so in addition to having five-star food at three-star prices – you’ll be helping educate future chefs.

A new learning opportunity is now available from the Learning Academy for Faculty & Staff:

Social media, such as Twitter and Facebook, is becoming increasingly common among the faculty and staff of GRCC. This learning opportunity provides recommended professional practices for blogging and using social media.  It is designed for any interested GRCC Employee.  Upon completing, you will be able to:

Register for this session at www.grcc.edu/currentlearning

For the first time in nearly a decade the principal of Riverside-Brookfield High School is going to be wearing heels. Last week the District 208 school board unanimously voted to accept the recommendation of Interim Superintendent David Bonnette to appoint Pamela Bylsma the post. […] Prior to attending CMU she attended Grand Rapids Community college and had a 3.97 GPA there. She received straight A’s in her graduate program at Northwestern.  (More)

Quinntrai Lampkins scored 16 points and finished with six rebounds, but it was not enough as the Grand Rapids Community College men’s basketball team fell to Lansing Community College, 68-60, at home Monday night.  (More)

Pending final HLC approval, Ferris State University will begin offering a Doctorate in Community College Leadership in Summer 2010. Tailored to the needs of full-time working adults, the program will be offered in cohort format and can be completed in three years. Most of the program is online with one weekend face-to-face meeting each fall and spring class and one-week summer face-to-face sessions.

Application-based and taught by academic faculty in partnership with community college leaders, this doctoral program is relevant to the changing environments in education.

Grand Rapids Community College faculty and staff will have the first opportunity to receive information at a luncheon on Monday, February 15 at 12:00 Noon in ATC Room 124.  RSVP for lunch to September Howat at (616) 643-5732 or ccleadership@ferris.edu by TODAY (February 10, 2010).