The hard work of the pilot project of the Keller Future Center, the Urban Farming Project, has been completed and the results of the team’s hard work were made available to the greater West Michigan community:

Click here to listen to this week’s episode, which features interviews with the people involved in the Keller Future Center Urban Farming Project. 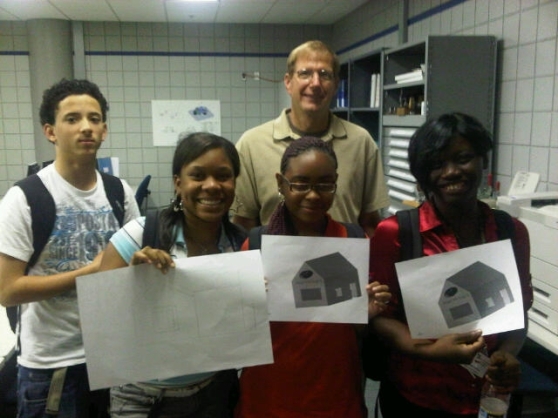 The 2010 Upward Bound summer program is underway and this year is partnering with GRCC departments to open up career exploration with our UB scholars. Upward Bound works with high school students from Ottawa Hills and Creston High Schools, offering a 6-week residential summer program for 10-12th grade students. In addition to the career exploration opportunities all students take summer classes in English, math, science and various labs. At the completion of the 6-week program, students may earn the opportunity to take a week long educational trip to Boston, MA.

Following is a list of departments UB is partnering with this summer. The partnership includes a tour of the department, an introduction to the academic requirements of each career field, as well as a look into the actual career experience via hands on activity.

GRCC is working with CBI Telecommunications Consultants to help identify some of the various phone lines that the college owns. They will be placing test calls to various numbers today (6/29/10), most of which are fax machines, alarm circuits etc. They will not be dialing any phones in the 234- exchange, so offices and classrooms should not be affected. If you do receive a test call, the caller will identify herself as being from CBI.

The latest listings for GRCC’s college channel TV programming are up on www.grcc.edu/channel28.  The new slate includes the entire Collegiate Network’s 3rd Annual Summer Summit, a brand new Lunch & Learn titled, “Canning Foods” (embedded below) along with many other programs recorded around the area. As always most programs are on our Youtube channel at www.youtube.com/grcc.

Should state lawmakers get involved in picking college textbooks to drive down costs? Book costs seem to be upsetting a lot of folks since they’re bubbling up as an issue here and in other states as well. […] Even used editions of books easily cost more than $100 each, which is more than a credit hour at Grand Rapids Community College.  (More)

GRAND RAPIDS — Matthew Wagner and Keegan Kresnak had no problem waking up early Sunday morning for some football. The two 11-year-olds had to be at MVP Fieldhouse by 9 a.m. to take part in the inaugural Tony Annese Free Football Camp. Annese, the Grand Rapids Community College head coach, offered three free sessions of drills and learning for campers in grades 4-12.  (More)

Some of the other local events associated with the third annual Mirror Image “Help Us Help Others” event are one dollar bowling for everyone, a classic car show competition, inflatable bounce houses for children, and a great DJ!

The West Side Learning Corner would like to congratulate their incredible staff Sabra Kinsley (Professional Tutor) and Jackie Villegas (Data Entry) for winning the Mary J. Szczepanski “Never Give Up” MS Scholarship.

Scholarships will be awarded at the 3rd Annual Miniature Golf Event for MS on Saturday, August 14th, 2010 (date corrected). Please contact Rick Szczepanski at scholarships@iserv.net for more information about the scholarship or event.