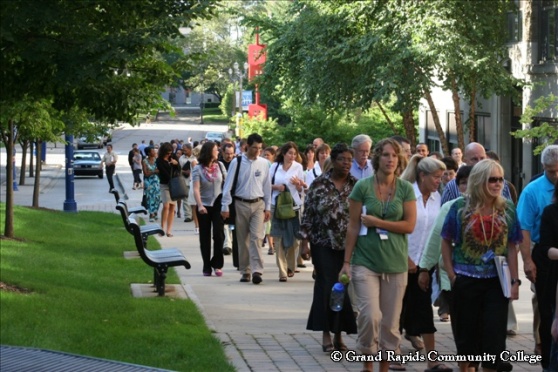 GRCC Employees gathered in the Fieldhouse for Opening Day to hear from college president Dr. Steven Ender.  In addition to learning about the new Innovation Challenge, the college honored faculty member Steve Abid in the Social Science department and staff member Julie Parks in the Workforce Training department with the “Excellence in Education” award.  Afterwards, all employees assembled on the Bostwick commons to be photographed in the shape of the GRCC “flying C’s” logo.

Also available is the video shot by Media Technologies of the entire presentation:

This year’s “Excellence in Education” award winners were Steve Abid (Faculty) and Julie Parks (Staff).  Kudos on a richly-deserved honor! 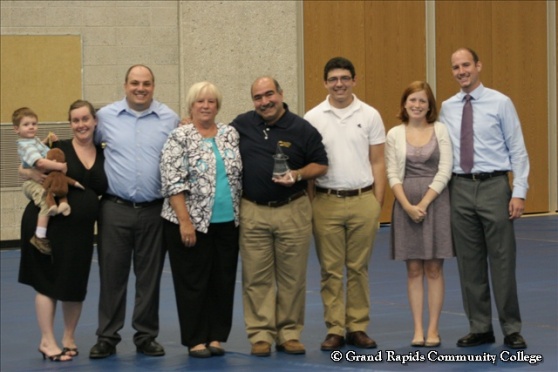 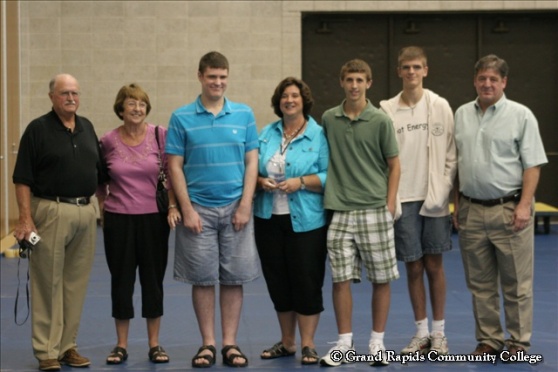 These photos came from the send-off given to Machinist Technician/Job Training faculty member Larry Pierson in the ATC Atrium to celebrate his retirement.

After completing a rigorous 5-week residential summer program, GRCC Upward Bound’s year-end trip took 39 students and 12 staff members to Boston, Ma. During this exciting and education-packed trip students were able to experience numerous attractions such as visits to Harvard University, Boston College and MIT, the New England Aquarium, The Salem Witch Museum, the Franklin Park Zoo, a dinner cruise in the Boston Harbor, Six Flags and The Naismith Memorial Basketball Hall of Fame.

GRAND RAPIDS — It took Tony Annese only one year to return the Grand Rapids Community College football program to a national stage.  The task now is to keep it there.  In his first season as the Raiders coach, Annese led GRCC to a 9-2 record, which included a Midwest Conference East Division championship and trip to a bowl game.  (More)

Geek-chic Renaissance man Erik Bauer has what you might call a collection of dream jobs, a mash-up of video games and Dungeons & Dragons, pit bulls and hamburger patties.    As the general manager of Mackenzie’s Animal Sanctuary, Bauer is in Lake Odessa a day or two each week as the strategic leader for the largest no-kill animal shelter in the Midwest.  […] Bauer achieved a longtime dream earlier this month with a strong showing at Gen Con Indy 2010, the global RPG (role-playing games) convention, picking up two “ENnie” awards for Gaming Paper and giving acceptance speeches to a room filled with authors and game designers he had been following since he took up Dungeons & Dragons as a student at Grand Rapids Community College.  (More)

The hilarious video put together by GRCC’s Media Technologies department and featuring Alumnus and Philanthropist Armen Oumedian is available:

For more information on entering the Innovation Challenge, visit www.grcc.edu/challenge