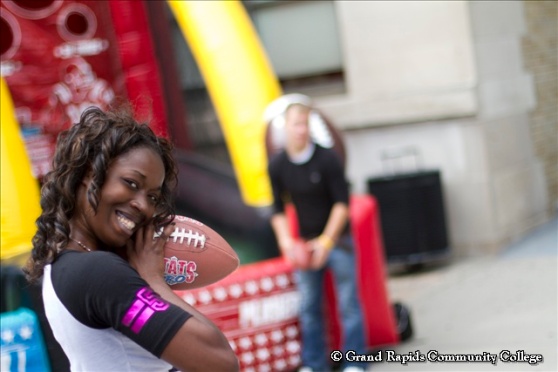 GRCC students were treated to a variety of events, food and cultural opportunities during Welcome Week and the Graphic Design department’s photographer Andrew Schmidt was able to capture the action:

When scheduling an event in CWEST, please make sure to check spelling closely, as these announcements are automatically loaded into the calendar of events and eventually are listed on the GRCC website homepage.

GRCC’s student-run Heritage Restaurant needs customers today (Tuesday, September 20th) so that the students can practice their craft.  As an incentive, the first 30 people that call and make a reservation for September 20th receives a free dessert with a purchase of an entree.

This collaboration uses poetry, visual art & music to remind us that human literacy is a process that must be learned, practiced & lived. Even though it’s been over 200 years since Great Britain abolished the TransAtlantic Slave Trade – human trafficking continues today. During the creation of these works, each haiku (a Japanese poetic form that uses 17 syllables) was interpreted with little to no explanation between the poet and other artists.

Each artist had the poem and their understanding of past and present issues of slavery to influence their interpretation. This process ensured our
determination to show that human experiences are universal when dealing with large and seemingly complex issues of social justice. Haiku Middle Passage is an ongoing artistic collaboration.

GRAND RAPIDS — Even at 19, Courtney Coulson had a clear direction planned for her life. The Caledonia area teen was working two jobs and taking a full load of classes at Grand Rapids Community College in efforts to become a nurse.  (More)

In her fifth season as the women’s volleyball coach at Indiana Tech, Kirsta Solberg knows where the mines are hidden and where the pitfalls lie: Don’t get caught up in your early-season success; don’t celebrate too soon; wait for the season to play out before the celebration begins. […] The player at the head of the middles is newcomer Kelsey Cox, a 6-foot-2 junior transfer from Grand Rapids Community College.  (More)

GRAND RAPIDS — More than 70 eateries have signed on to participate in the second go-round for Restaurant Week Grand Rapids. […] Last year’s event generated an estimated $1.2 million in additional sales at area restaurants and raised more than $19,000 to establish a new culinary program scholarship at Grand Rapids Community College.  (More)

The Special Programming listings for GRCC’s College Channel beginning September 19th are now available. The College Channel can be viewed on Comcast Cable Channel 28 and 903 (digital as well as AT&T U-Verse Channel 99).   The new offerings include 2011’s Opening Day Proceedings, Aquinas College presents James Ruland “Patents,” a presentation by Michel Pichot, and Kendall College presents: Design Thinking. Programming is also streamed live at www.grcc.tv and most programming is available on our Youtube Channel at www.youtube.com/grcc.

These listings are also posted at www.grcc.edu/channel28.

The speaker is Brian Hadley, currently a WMU student and a former GRCC student. Brian’s topic is Dynamical Systems, Andrei Markov, and the Stochastic Matrix; an abstract may be found below. Brian tells us that only a basic knowledge of matrices is needed to understand the talk, and it should be appropriate for students at the level of Ma 110 (College Algebra) and higher.

Please encourage your students to attend this talk by a former GRCC student. We also hope that you will attend.

Refreshments will be served at 2:45 PM.

(regardless of race, ethnicity, national origin, gender, sexual orientation, religion, age, weight, height, marital status, status as a Vietnam era veteran, and disability, as a reflection of the GRCC EEOC statement). The program philosophy provides not only a safe space for all people, but also increases communication and understanding among people. One of the goals of SafeZone is to emphasize that all individuals will be treated and respected as human beings. Further, the program emphasizes that ignorance, bigotry, and harassment will not be tolerated in an environment of learning.

The next session will be held on: Tuesday, October 18, 8:30 a.m. to 1:30 p.m. (breakfast & lunch provided) please register at dlcregistration@grcc.edu.