The data center is planned to be moved over the Thanksgiving weekend. This includes all systems, including the GRCC Web Site, Blackboard, PeopleSoft, ImageNow, etc. More details will come later in the week as we better define which day(s) systems will be down. Blackboard and PeopleSoft (FS and CS) will be down Friday, November 25 for most of the day.

Condolences to GRCC Board Member Margo Anderson on the passing of her sister, Sarah Joneane Anderson.  The obituary and details about the services are available below: 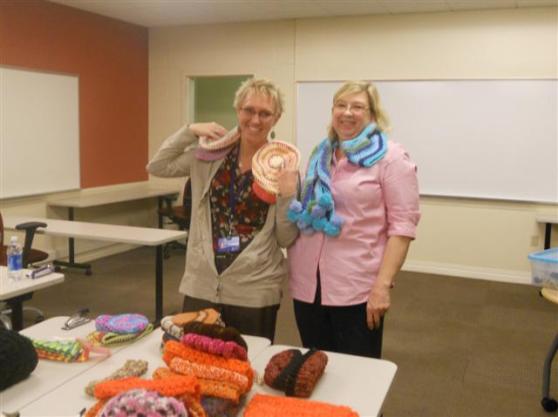 The GRCC Crocheters/Knitters have once again donated their knitted goods they created this past year from donated yarn to a great group …. GRCC students. The GRCC Crocheters/Knitters is a group of cross-campus volunteers that crocheted or knitted 34 hats, 36 scarves, 4 scarf/mitten sets, and even 2 afghans. Working with GRCC Cares, a student organization, and the Student Affairs office, these items will be given to GRCC students in need. If you know of a student (or their children) who may need some warm accessories, please email grcccares@gmail.com.

Beginning Tuesday, November 15, 2011 RaiderCard Door Readers will be replaced with the new contactless technology. Please note: Any GRCC employees who currently have access to buildings after hours or need to gain access to an area that requires a RaiderCard please make sure you have the new contactless card. Please contact Paulo Teles (pteles@grcc.edu) if you have any questions.

The Annual Report of GRCC’s Foundation is now available online at www.grcc.edu/foundation 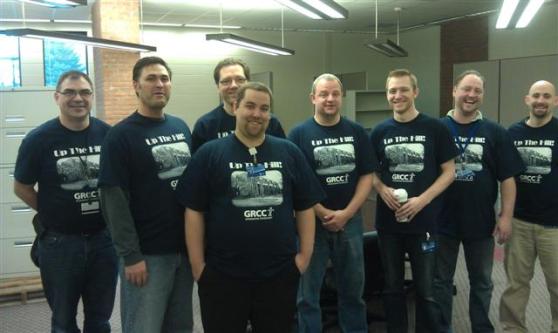 Vicky Janowiak sent along these photos noting how appropriate it was that the IT geeks moved up to Sneden Hall on “Binary Day:”

GRAND RAPIDS — As family of Cortney Tillman tried to fathom why someone would fatally shoot him on a Southeast Side street, they hoped two other relatives would recover from gunshot wounds. […] Cortney Tillman had taken classes at Grand Rapids Community College and, while he was taking a break to pay back financial support, had hoped to return to school in January, his father said. (More)

Her black Labrador retriever, Otis, gazed at the television set intently. The rest of her family and friends yelled encouraging remarks at the screen. […] Colleen Pierson is an adjunct professor at Grand Rapids Community College and Grand Valley State University. She was Ginger’s teacher in her Rockford High School Broadcast Communications class  (More)

NEW YORK CITY, N.Y. (WOOD) – If you were watching ‘Good Morning America’ on WOTV 4 Saturday morning, you probably noticed a former member of Storm Team 8 on the set. Ginger Zee made her ‘GMA’ debut Saturday. She will be the show’s weekend meteorologist. Ginger was hired from WMAQ in Chicago where she’d been working since leaving Storm Team 8 in September 2006.  (More)

We have just completed the first week of our 2-week 2011 United Way Campaign. Thank you to everyone who has participated in the events, donated money or volunteered during this first week. If you haven’t already done so, please remember to turn your forms in by the end of the day on Friday, November 18th.

Here is where we stand as of Friday, November 11th:

The Grand Rapids Community College Mathematics Department will be hosting its next monthly Mathematics Seminar on Wednesday, November 16, 3:30 – 4:30 PM in 108 Cook.  Our speaker will be Dan Garbowitz.  Dan teaches at Coopersville High School and is an adjunct instructor in the GRCC Mathematics Department.  The title and abstract of Dan’s talk may be found below.

This talk should appeal to anyone who appreciates beauty in mathematics, or who would like to develop an appreciation for its beauty.  As always, anyone from the greater GRCC community may attend.

Euler’s Formula for Polyhedra:  The Second Most Beautiful Theorem in Mathematics

Euler’s formula for polyhedra is so simple that a grade school student can understand it, yet this simple formula remained hidden from mathematicians and great thinkers for over 2000 years!  The results of the formula gave birth to a new branch of mathematics called topology.  This talk will focus on the history of Euler’s formula and present two proofs of it.  The proofs differ vastly in their arguments and each is quite beautiful.  One will even use a second branch of mathematics that Euler is responsible for – graph theory.