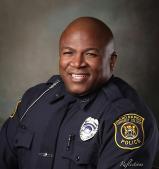 The Campus Police Department is pleased to announce the promotion of Officer Jesse Heard to the position of Police Sergeant. Sergeant Heard will be assigned to day shift for the first couple of months and then will be assigned to supervise the second shift. Sergeant Heard has been with GRCC since 2002 after spending 7 years with the Grand Rapids Public School’s Public Safety Department. Sgt. Heard has served as a high school football, wrestling and track coach, also as a GRCC football running back coach.

According to Sgt. Heard, “I have worked in the position as an officer at the college for 9 1/2 years, and am very much looking forward to the new opportunities provided by the position of SGT.”

Chief Whitman added, “I am very excited to have Sgt. Heard as a member of our command staff. He has a very positive attitude, is well respected among college employees, and is open to new ideas. I look forward to continuing to work with him in this new role.”

Please congratulate Jesse when you see him.

GRAND RAPIDS (WZZM) – Based on his Facebook page, it appears the man who drowned in a pond at Aquinas College went to Grand Rapids Community College and worked as a caretaker for a closed head injury patient. 29 year old Nathaniel Pelkey was found floating in the pond Wednesday. He was fully dressed in winter clothing.  (More)

Kyle Jewett is hoping to ignite the Reeths-Puffer Rockets’ football program. Jewett recently was named the new varsity head coach at the Class A northside school. He takes over for Tim Odette, who led Puffer to a playoff spot in 2007 and resigned after last season. […] Jewett, who is a Social Studies teacher at the school, served as a running backs last season for the unbeaten Grand Rapids Community College football team.  (More)

HOLLAND — How do you transform an enormous block of ice into a glistening work of art? For Secchia Institute student Jessica Miller, seeing is believing. Miller will be one of four Grand Rapids Community College culinary students equipped with chainsaws, chisels and power drills at downtown Holland’s annual ice sculpting competition starting Friday.  (More)

Tucked into a small shopping area of Comstock Park, down the street from the Fifth Third Ballpark in Grand Rapids lies a sweet bakery called, Sweet Cakes Design. […] Owner and operator, Barb Hoek, has started from the ground up in her bakery and shop career. Starting from the banking and credit union industry, Hoek realized how much she enjoyed cooking and the culinary profession. She returned to school in Grand Rapids Community College’s culinary program in 2001. After finishing the pastry certification, Hoek fell in love with the art of pastry and bakeries.  (More)