Yesterday during the Golden Raiders Retirees reception (photos from which will be posted tomorrow), GRCC named former college provost and executive vice president, Dr. Velvie Green, as Emeritus Faculty/Administrator for 2012. The award is given at the end of each academic year to a retiree for outstanding work at the college, and will be presented at this year’s commencement on April 27.

GRCC professor Cheryl Kautz was recently honored with the Blackboard Catalyst Award for her Exemplary Course.

The Blackboard Catalyst Awards program annually recognizes and honors innovation and excellence in the Blackboard global community of practice, where teachers and learners work every day to redefine what is possible when leveraging technology.

“Taking a course that I teach in the classroom and converting it for online instruction was both fun and challenging. The Blackboard Exemplary Course Program (ECP) helped ensure the course structure and design met the highest standards for usability, accessibility, and student engagement with equal amounts of work and no compromise in quality. The uses of multiple technologies including Blackboard Collaborate and Instant Messaging for virtual office hours, along with mobile phone alerts to keep students up-to-date, all enhance the learning process. The Grand Rapids Community College Distance Learning and Instructional Technologies (DLIT) and the professors in the Computer Applications department provided the support, instruction, and resources for me to build an effective online course. Their expertise and dedication are invaluable.” 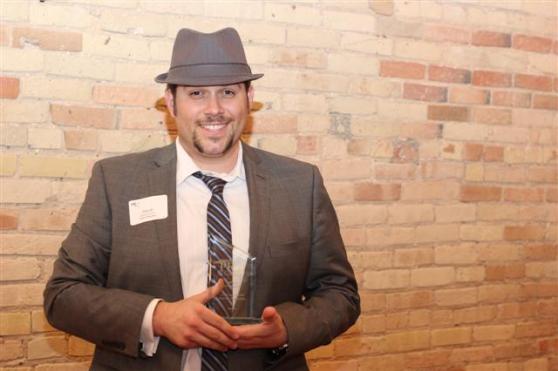 Last night, GRCC received a Gold PRoof Award in the “Creative Tactics” category from the West Michigan Chapter of the Public Relations Society of America for its promotional community outreach project involving the Ice Gurus and ArtPrize.  Accepting the award for the college was Derek DeVries, but integral to the project were other college employees including Ryan Lockwood and Matt Coulliard from Graphic Services

GRCC partnered with local artisans Randy Finch and Derek Maxfield of Ice Sculptures Inc (and the Food Network’s “Ice Brigade” show) to create an ice sculpture that was on display during ArtPrize (a nationally-recognized annual event in Grand Rapids that drew 320,000 visitors and over $15 million in to the local economy).  Finch and Maxfield were ideal brand ambassadors for GRCC; both work with the college’s culinary arts students and Maxfield is an alumnus of the program.  Thanks to the previous popularity of the Ice Gurus, the refrigerated truck displaying the sculpture secured placement at The B.O.B. downtown (considered to be “Ground Zero” for Artprize).  Between September 19 and October 7, 2011 the sculpture attracted thousands of visitors and local news coverage, enabling GRCC to engage its publics one-on-one to promote its wide array of programming.

Campus Activities, in partnership with Student Life, is excited to extend the Go See GR! Museum Pass Program for the Spring/Summer 2012 semester. This program allows current GRCC students, faculty, and staff FREE access to both the Grand Rapids Public Museum and the Grand Rapids Art Museum by showing their RaiderCard. Each museum has many exhibits, new and permanent, that can help extend learning outside the classroom. The museums also are hosting several other events throughout the summer such as GRAM on the Green – an outdoor concert series, photo walks around the city, and several special day events that are included in the Museum Pass Program.

If you would like more information about the Go See GR! Museum Pass Program please visit www.grcc.edu/GoSeeGR

The phone system will undergo maintenance on Saturday, April 28th at 9:00 AM. There may be partial phone outages as a result of the maintenance. Cisco phones will not be affected by this maintenance and calls to the college will continue normally. Maintenance should be completed by 10:00 AM.

[Caption: Grand Rapids Community College is asking voters to approve a nearly $100 million tax hike that would allow the college to finance a long list of repairs and upgrades to campus buildings.]  (More)

GRAND RAPIDS, MI — Supporters of Grand Rapids Community College’s $98.6 million bond proposal have raised more than $121,000 in advance of next month’s election, campaign finance reports show. But nearly half the total came from two donors: Richard and Doug DeVos, who each gave $25,000 to support the measure.  (More)

Seniors stand in support of citizens for ‘our community college’
April 26, 2012 By the Rockford Squire

Senior citizens and middle-aged workers all around Kent County are coming together in support of the GRCC Yes Campaign for “our community college.” Senior citizens and middle-aged workers join local elected officials, labor organizations, public safety officials, Republicans and Democrats in the large and growing list of individuals and organizations urging Kent County residents to vote yes on this important proposal.  (More)

KENT COUNTY, Mich — Grand Rapids Community College is looking to make almost $100 million in repairs to the school. “It sounds like a great deal of money, but as a community, I think we owe it to ourselves to maintain the community college and keep things going,” Kathy Izenbaard, one of the voters said.  (More)