Students thinking about a degree in Physical Education or Exercise Science should plan to attend the Wellness Academic Advising Day on Wednesday October 9, 2013, from 12-3pm p.m. at the Ford Fieldhouse. Faculty will be on hand to meet with students and discuss career and transfer options in the field.

Displayed at the Collins Gallery on the campus of Grand Rapids Community College, Jessica can Type and Steven can Honk, Dustin Roger’s 2013 ArtPrize entry, represents the sometimes inadequate communication between a man and a woman. The two-panel oil painting depicts the “challenge of sending a message and of being misunderstood,” Rogers explains, “especially with today’s electronic technology, which people use to escape reality.” Central to his work is a decidedly low-tech tin can telephone, a device that Rogers, an MFA candidate at Kendall, and his friends began to experiment with. Experimenting with tin-can communication provided some of the initial concepts for the painting.

Jim Wilde’s contribution to ArtPrize is a three-tiered tabletop fountain painted with a landscape. Resembling traditional Italian Medici Wares, Wilde’s piece is featured prominently in the Paul Collins Gallery on the fourth floor of the Main Building of Grand Rapids Community College, and is clearly visible even when the gallery is closed.

Fall is here and so is ArtPrize 2013: nineteen exciting days for Grand Rapids with seasoned and new ArtPrize contestants displaying their work side by side. For some, like Nichole Riley, ArtPrize 2013 will be the first time they display their art in public.

“Art,” Riley explains,” is very personal.” It took a loving push to get her to display Enchanted Disregard at GRCC’s Spectrum Theater. “My husband, he’s my biggest support,” Riley says, “he’s my push. I can ask him [about my art] and I’m not hurt [by what he says]. And I don’t have to listen.”

… Grand Rapids Community College and Western Michigan University announced they have signed an articulation agreement that will give GRCC Associate of Music degree students a seamless transfer to WMU’s music and music therapy programs.

How do you make an ArtPrize entry? Here’s a time-lapse video showing how Scott Garrard, of the visual arts department, put together “Teapot 48.”

From Angie Pena, GRCC’s coordinator of contingency employment and health-care reform data: In honor of our former employee Peggy Gorno, a small group (Enrollment Center Crew) walked for the Komen West Michigan Race for the Cure this past Saturday. It was a beautiful day. The race started at 8:30 a.m. at the RiverTown Mall. We bumped into Jim Fox from HR, who ran the timed race and won 2nd place in his age division, and found Raul Alverez, our former employee, at the finish line. 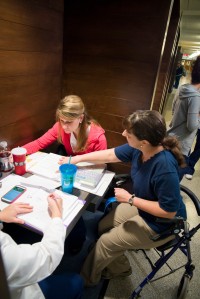 At 2 p.m. Tuesday, representatives from GRCC and Meijer will dedicate the Meijer Center for Business Studies.  The center, located on the second floor of the college’s Main Building, features:

Find out where your garbage goes! GRCC’s popular Garbage Tour takes you on a 5 1/2-hour educational journey of the main facilities in Kent County that deal with post-consumer waste, i.e., garbage.

Whether you are looking for ways to reduce waste for your business or home, this expedition will take you where most are forbidden to go!

We will start with a visit to the incinerator. Experts will describe the inputs (garbage) and outputs (electricity) for this facility and what it provides for the Grand Rapids area. Our second stop is the materials recovery facility. Here we will be guided on a walking tour and educational discussion of Kent County’s state of the art recycling efforts. There will also be an opportunity to eat your sack lunch here. We’ll see the mountains of yard waste diverted for composting, and learn how and where this is done.

Our final stop is an up-close and personal bus tour of the local landfill. Enjoy the view while professional landfill personnel describe the engineering features and local statistics for use of the South Kent Landfill.

Congratulations to the GRCC Golf Team as they continued their excellent fall season as they won their second consecutive tournament yesterday at the Ancilla Invite at Swan Lake Resort Golf Course in Plymouth, IN. The Raiders shot a team score of 301, winning the tournament by 12 strokes. Leading the way for the team were Tony Conaway, a sophomore from Davison, and Zach Bialik, a freshman from Manistee, both shooting a 74. The Raiders return to Swan Lake in two weeks to compete in the National Championship Preview Tournament.

VoiceGR is an initiative of the Dorothy A. Johnson Center for Philanthropy at Grand Valley State University. They are seeking answers to some of our community’s biggest questions. They are polling residents about their satisfaction with the city, their employment status, the economy, racial equality, and their reasons for staying in this area, among other important community questions.

They are asking YOU to take 10-15 minutes of your time to affect the community. Many organizations in the Greater Grand Rapids region will be using the responses to help shape community programs that will support YOUR needs more effectively.

Share your voice today by clicking here to begin the survey!  The survey is also available in Spanish:  Click on the “Take the Survey” tab at the top of the website to change the language to Espanol!  Or click here.

The 2013-2014 Diversity Lecture Series kicks off October 2 with journalist Jose Antonio Vargas. For details about the series, click here.

On behalf of the Grand Rapids Community College

Diversity Leaning Center you are invited to a film viewing of

In 2011, Pulitzer Prize-winning journalist Jose Antonio Vargas outed himself as an undocumented immigrant in the New York Times Magazine.   “Documented” chronicles his journey to America from the Philippines as a child; his public struggle as an immigration reform activist/provocateur; and his journey inward as he reconnects with his mother, whom he hasn’t seen in 20 years. A broken immigration system leads to broken families and broken lives.

Students thinking about, or well on their way to, a degree in math, physical science or biological sciences should plan to attend the
Science and Math Advising Days October 14 and 15, 2013, from 9:00 a.m. to 6:00 p.m. both days, on the third floor of the Science Building. Faculty from each department will be on hand to discuss a career in math or science, and provide advice on degree and transfer programs. For more information, click here.

There are literally too many course offerings in the month of October to detail them all in GRCC Today. To view the course details and register for any of the 28 courses offered, please visit http://www.grcc.edu/staffdevelopment/currentlearningopportunitiesregistration or call Staff Development at ext. 4285.

Thursday, Sept. 26 — The third installment of President Barack Obama’s $12 billion reform plan for the nation’s community colleges announced Thursday will benefit Lansing Community College and the mid-Michigan area in more ways than one.

KALAMAZOO, Mich., Sept. 27, 2013 /PRNewswire/ — Consumers Energy has named Kalamazoo College its “Green Generation Customer of the Year” in recognition of the College’s overall sustainability effort and its voluntary participation in this renewable energy program.

ROCHESTER — The Genesee Community College women’s volleyball team has finally dug itself out of an early-season hole and pushed past the .500 mark.

… GCC will be at the Grand Rapids Community College Tournament this weekend.

CAB is sponsoring a Blood Drive on Wednesday, October 9th from 8 am to 4 pm. If you are interested in donating blood, please email Evan Macklin at your earliest convenience. It takes less than 15 minutes and you receive a coupon for a free large one-topping pizza from Papa John’s!