Rent, food, clothing, heat – these are essential costs for living in West Michigan. But what if a family’s income isn’t enough to cover these costs?

Access of West Michigan’s upcoming poverty simulation workshops will seek to initiate participants into the knowledge of what it’s like for the working poor to balance their budget with their incomes. The workshops progress participants through four 15-minute “weeks” where they play the role of a low-income person approaching stores and agencies to acquire goods and services considered essential. One will be held at Davenport University on March 24 and one will be held at Grand Rapids Community College on March 31. Workshops are intended to “sensitize participants to the realities faced by low-income people and motivate them to become involved in activities which help reduce poverty in our communities,” according the organization’s website.

WASHINGTON, March 13, 2014 /PRNewswire-USNewswire/ — Kids in Michigan will stand up against tobacco on March 19 as they join thousands of young people nationwide for the 19th annual Kick Butts Day. More than 1,400 events are planned across the nation. (See below for a list of local events.)

… The Grand Rapids Urban League and the Urban Fellows will host a Kick Butts carnival at Grand Rapids Community College to raise awareness of the harmful effects of smoking, and how African Americans and youth are specifically targeted by tobacco companies. The carnival will also commemorate the anniversary of the Surgeon General’s report. Time: 11 AM. Location: Raider Grille, 143 Bostwick Avenue Northeast, Grand Rapids. Contact: Lisa Butler (616) 633-6788.

GRCC has received our PACE (Personal Assessment of the College Environment) survey results. Now, it is important that we use the data to improve as an institution. We are now offering sessions for employees to learn more about the results and to talk about what improvement looks like. We will focus on the top ten areas of improvement. We hope to see you at one of our sessions where you can take advantage of the opportunity to engage in the discussions around improvement.

Online registration is available at http://www.grcc.edu/staffdevelopment/currentlearningopportunitiesregistration or by calling Staff Development at ext. 4285.

Andrea Keating graduated from GRCC’s Secchia Institute for Culinary Education in 2012, but in some ways, it’s like she never left!

Keating works for Steelcase’s Eurest Division of Compass group, which provides food service and support services around the world. While her company’s reach is global, her ties to SICE are all around her: She works with 10 other GRCC culinary graduates.

“These people have phenomenal skills, ambition and creativity — most of it learned through their education at Secchia,” she said. “It’s a top-notch program, and I see the results daily in the strength of our staff here at Steelcase.”

Keating added: “These people have taken the culinary program at Steelcase to the next level , and we are developing a great reputation in the community. It’s my goal to be one of the premier employers in West Michigan for culinary talent, and we have an excellent start.” 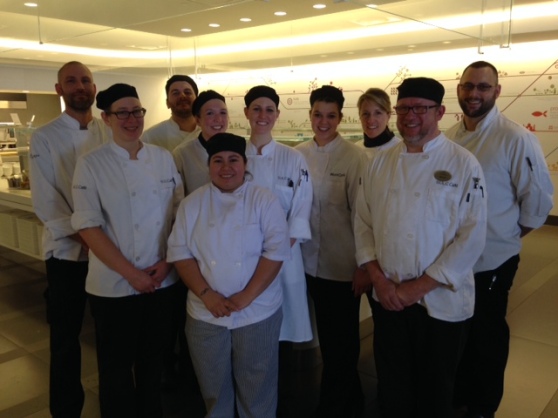 On Friday, March 14, 2014 between 10PM and 2AM the RaiderCard system will undergo a system upgrade. The following services will be unavailable to students during the upgrade: campus printing, vending readers, RaiderCard machines, eAccount website and mobile app.

Please note that student parking gates will be raised during the upgrade. Staff parking and door access to campus buildings will work normally. Please contact Paulo Teles in Student Life at 234-3754.