On May 5, there will be a change in the way students log into their GRCC email.

The old way for example:

Mathematics professor Alejandro Saldivar contributed to the April 27 health section of The Grand Rapids Press. If you have Facebook, you can see the article here.

As part of the college-wide summer construction project, Graphic Design will be relocating to 411 Cook Hall May 1st.

On Friday May 2nd, GRCCePRINT Customer Service will be located on the 4th ﬂoor of the Main building in the Art Gallery.

Due to the limited space, we will have this Summer for paper storage, paper orders will be limited to one case per order. Please encourage your staff who have printing needs over 250 copies to use our online ordering system and we will deliver the order to your department.

Thank you for your consideration.

High Schools Partner with GRCC to Get College Credits Early

Godfrey Lee Public Schools, MI — Godwin Heights and Godfrey-Lee high schools have joined the trend of offering high school students a way to earn college credit right at their own schools, in a new partnership with Grand Rapids Community College.

Holland, Mich. — Over a career spanning more than two dozen years, Junior Valentine has played countless gigs with a bevy of bands steeped in R&B, blues and rock, taught guitar, bass and ukulele to more than 400 students and toured the country.

… A chance encounter with young, progressive bluegrass mandolinist Jason Wheeler and an inquiry from percussionist and Grand Rapids Community College instructor Brandan Grinwis has produced an eclectic trio unlike anything else in West Michigan a rootsy, rhythm-happy outfit that meshes elements of blues, R&B, funk, Island music, folk and bluegrass to simmer up a tasty of styles.

… It was a tough blow for Kater, who led Montague to back-to-back state titles in 2008-09. He originally committed to CMU, but followed Butch Jones when he left to become the head coach at Cincinnati. Kater went from Cincinnati, to Grand Rapids Community College and then to CMU. He spent the 2012 season as a backup for the Chippewas before winning the job last season.

If you currently use Firefox, Google Chrome, or Safari exclusively you will not be affected. The GRCC IT Security department is aware of the issue and are waiting for Microsoft to fix the issue.

Performance management is about creating a work environment that helps GRCC meets its goals. Our performance evaluation tool is intended to:

The session will be an overview of the Meet & Confer Merit Compensation System (formerly called our ‘pay for performance’ system).

Sessions available on the following dates and times:

Registration is available online at http://www.grcc.edu/staffdevelopment/currentlearningopportunitiesregistration or by calling Staff Development at ext 4285.

The Mechanical and Architectural Design Department planted 100 trees in the community as part of our 100 year celebration. In keeping with the 2014 celebration of Earth Week, we planted trees in the Plaster Creek Watershed, Burton Nature Center, Ada and Roselle Parks. 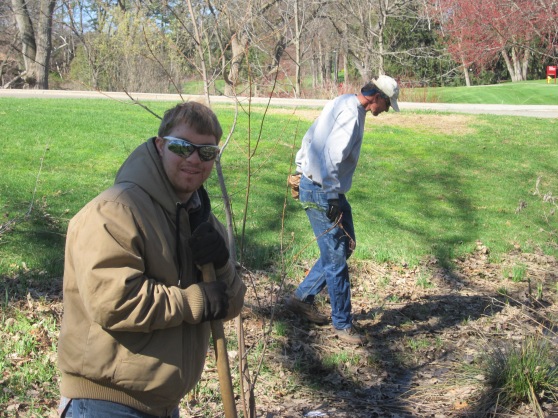 Joel Boersma (foreground), of Noordhoek Academy, and Professor Dave Warners, head of Plaster Creek Stewards, plant trees in Buster’s Hollow to help build up a rain garden along a tributary of Plaster Creek.

Need help entering final grades in the Blackboard Grade Center? Have questions about exporting your grades into Excel to archive the data? Just hungry for a donut or a cookie, and want to visit with the DLIT staff and faculty? Please join us during finals week on Monday, April 28 from 10 a.m. – 2 p.m. or Tuesday, April 29 from noon – 4 p.m. in 351 Main for answers to your Blackboard Grade Center questions or just a quick bite to eat and chat about Blackboard.

Improve your relationship with your grandchild through an interactive setting, focusing on the 7 Dimensions of Wellness, and learn the tools to help your grandchild grow into a confident, strong and caring individual.

Grandparents of any age from Kent, Allegan, Lake, Mason, Osceola, Mecosta, Newaygo, Montcalm or Ionia counties are encouraged to attend with their grandchildren, ages 8-15 or 5-12 years old. A donation of $20 per one grandparent and one grandchild is suggested for each four-week session. Registration is through the GRCC Workforce Training office by calling 234-3400 or going online http://www.grcc.edu/olcregistration

Unless the GRCC campus is closed, Campus Dining will continue to provide catered services despite retail operations being closed.

A message from President Ender:

This is Provost Gely’s last week at GRCC and I would like your help in saying THANK YOU to her for her exemplary service to the college and to our students. Please take the time to stop by her office, or send her an email wishing her well in her new endeavors at Aquinas, as I know you will miss her as much as I will.

Interested in teaching GRCC’s First Year Experience course, CLS 100? Join us for an overview to the course from 1-4 p.m. May 8. The session will examine changes to CLS 100, the new textbook, common assignments, infused technology, and the shift to mandatory CLS 100 that began Winter 2014. It will also cover pertinent information for instructors interested in teaching this important student success course. Even if you have taught CLS 100 in the past, we have made significant changes that were first implemented fall 2013, so we strongly encourage you to attend this session if you haven’t attended one in the past year. You may sign up for the session through the Center for Teaching Excellence web site. If you have questions, contact Lynnae Selberg or Pat Missad at 616-234-3900 or lselberg@grcc.edu or pmissad@grcc.edu.