GRAND RAPIDS, MI — A statue honoring the late Helen Claytor was unveiled Wednesday, July 23, by the Grand Rapids Community Legends project. It is the sixth statue placed by the initiative, which is funded by the family of former Universal Forest Products CEO Peter Secchia.

The statue of Claytor, a civil rights activist who became the first African-American president of the national YWCA, was placed in Grand Rapids Community College’s Dr. Juan R. Olivarez Student Plaza. Carla Blinkhorn, CEO of the YWCA West Central Michigan, described her feelings about the unveiling as sad and grateful.

GRAND RAPIDS, MI – Grand Rapids Community College faculty and staff are celebrating the school’s 100th anniversary with a series of donation projects, ranging from collecting school supplies for children to sending books to inmates of the Kent County Jail.

Autocam brand to live on after acquisition

While Autocam Corp. will be acquired by a Tennessee-based public company in a deal that was announced in July, the automotive supplier does not expect the sale to have much impact on its West Michigan operations.

… Autocam is also expected to continue its employee training programs, which aim to develop a skilled workforce for the company, he said. Through Autocam’s Advanced Manufacturing Partnership program with Grand Rapids Community College, the company pays for employees education while they continue to work for the manufacturer. Kennedy said he believes those programs will continue under the new ownership, since many of NN’s talent development needs are similar to Autocam’s.

GRAND RAPIDS, MI — George Rosinski has authored a resume as a Little League manager that, in scale and context, compares favorably to most any baseball manager that has ever managed a club in the state of Michigan.

… (Brad) Buurstra, now an 18-year-old shortstop and righthanded pitcher that will play at Grand Rapids Community College next season, still relishes each trip to a tournament championship as much as the last.

… Union teammate Devin Husted joins Buurstra on the District 9 roster, as does Grand Rapids Community College sophomore pitcher Domonic Cintorino, a Kenowa Hills alum; all three have played together under Rosinski since the Senior League World Series trip to Bangor, Maine in 2012.

The Mid-American Conference may be sleeping on a football giant at Central Michigan.

… (Cody) Kater had a great high school career at Montague and attended Grand Rapids Community College before transferring to CMU.

We’re looking for volunteers to be in a GRCC video shoot! We’d like students (you can send your student employees) and casually dressed staff (no business wear). We’ll be doing the filming at 1 p.m. July 29 in the Calkins gardens. If you’re interested, contact Chloe in Communications at extension 3535 or cbeighley@grcc.edu.

A statue of Helen Jackson Claytor was unveiled on GRCC’s Olivarez Student Plaza on July 23. It’s the sixth statue in the Grand Rapids Community Legends project. Mrs. Claytor was a civil rights activist who became the first African-American president of the national YWCA.

We are still looking for volunteers to help collect GRCC stories and birthday wishes after the Byron Festival Days in Byron Center this Saturday, July 26. The GRCC Story Van will be in the parade beginning at 10 a.m. and then set up after to record stories and birthday wishes. Check out this link of two retirees, Alice Donahue and Bunny Bookwalter, who have worked a couple of events gathering stories.

If you are available, contact Liz Timmer at ltimmer1@comcast.net or 457-3708.

GRAND RAPIDS, MI — The first African-American president of the national YWCA will be memorialized with a downtown statue. Helen Jackson Claytor, whose leadership of the local Young Women’s Christian Association prompted the resignation of three white board members, is the latest addition to the Grand Rapids Community Legends project.

A bronze, 7.5-foot statue of the Claytor, who died in 2005, will be unveiled 5 p.m. Wednesday, July 23, in Grand Rapids Community College’s Dr. Juan R. Olivarez Student Plaza, across from Fountain Street Church.

MECOSTA COUNTY, MI — A man is charged in a Mecosta County crash that killed two cousins.

… Michael Aguilar, 22, of Coopersville, and Roman Aguilar-Emmons, 18, of Wyoming, died in the crash. They were riding in Fuentes-Perdomo’s vehicle to Mount Pleasant’s Soaring Eagle Casino when police said Fuentes-Perdomo failed to stop at the intersection of Eight Mile Road and Northland Drive and collided with a pickup truck about 4:20 p.m. May 3.

(Article doesn’t mention it, but Michael Aguilar was a GRCC student.)

An informational session will take place tomorrow for an event this summer that will showcase West Michigan’s do-it-yourself makers.

The story van made a stop at Sparta Town & Country Days to collect some GRCCmemories! Keep an eye out for the van this summer — it’s scheduled to be at the Kent County Fair on August 6 — or share your story online by clicking here.

All shred bins are going to be removed if they have not been already. The new shredding company, Rapid Shred, will be here Thursday, July 24, to place the new shredding containers. Please bear with us through this transition.

Essie McGhee is the latest recipient to be awarded the “Golden Plunger” trophy by his peers in Facilities. The Print Shop staff selected Essie as the recipient for all his help getting them back into the print shop following construction. 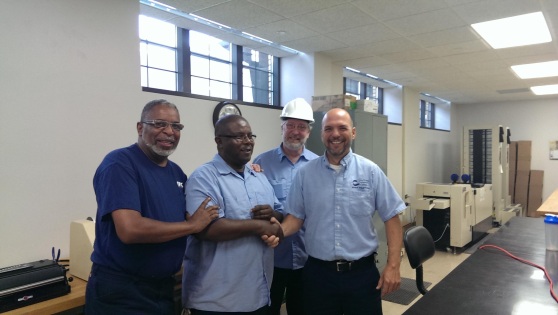 Project Risk Management includes the processes of conducting risk management planning, identification, analysis, response planning, and controlling risk on a project. The objectives of project risk management are to increase the likelihood and impact of positive events (i.e., opportunities), and decrease the likelihood and impact of negative events in the project.

The six Project Risk Management processes are as follows:

This preceding information was taken directly from the following:

Next week we’ll look at strategies for managing negative project risks or threats.

GRAND RAPIDS, MI – The salary schedule for Grand Rapids Community College police officers will climb by 2 percent in the 2014-15 fiscal year, under a new contract approved Monday by the college’s Board of Trustees.

A GRCC Screening Committee Training Session has been added to the calendar: Wednesday, July 23rd from 1-3 PM in Room 103 Sneden Hall.

GRCC held a pinning ceremony last week for students completing the medical assistant program. Linda Witte, Julie Parks and Fiona Hert spoke to the 14 graduates — half of whom already have job offers! 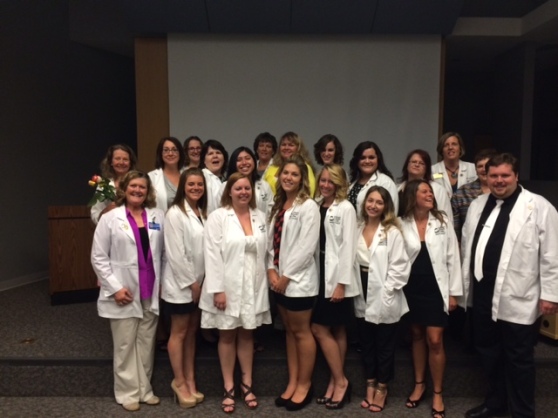 It’s going to be a beautiful day – stop by for some ice cream and yard games today between 1:30 and 3:00  p.m. on the DeVos campus between Sneden and Mable Engle.

Hope to see you there!

The summer fun continues at the Student Center on Monday, July 21. Stop by the Multi-Purpose room anytime between 11 a.m. and 1:30 p.m. for some free pampering, compliments of Douglas J Aveda Institute. Their staff will be giving out chair and hand massages. Drop by for some summer relaxation! Contact Sandy Gregory or Julie Otte with questions.