Mike Gillan, of the Music Department, would like to express his thanks to the campus community for their kind messages and notes on the passing of his father, Staff Sgt. Eugene Gillan. Mike shared the messages and notes with his family, who greatly appreciated the expressions of condolence.

Judges to take on entries in Grand Cocktail 2014

GRAND RAPIDS (WZZM) — Restaurant Week in Grand Rapids begins next week, but one part of the annual event is being held today.

Circle Theatre will be performing “Monty Python’s Spamalot” from August 7-23. Performances will be held at the Aquinas College Performing Arts Center, and tickets can be purchased either online or by calling the Circle Theatre Box Office.

… Kaechele, who also serves as Theater Program Director for Grand Rapids Community College, is no stranger to Circle Theatre. He has been involved with the company since the early ’80s, when he started out acting in Circle Theatre shows. He estimates that Spamalot is the 16th production he has directed for Circle Theatre since 2002.

For those with disabilities, celebration marks progress and resolve to keep moving forward

A showcase of talent, community, and ability lit up Grand Rapids Rosa Parks Circle on Tuesday.

… Peter Gordon, Director of Jabez Ministries, a ministry for Grand Rapids Community College students with disabilities, said the passing of the ADA was a big step forward.

The Golden Plunger has been passed once again!

Essie McGhee passed it on to OB Gladyness!  The Helen Claytor statue was dedicated on the our campus on July 23 as part of the Community Legends project.  There was a great turnout for the ceremony, and the courtyard was packed!  OB scrambled to deliver an additional 100 chairs to the courtyard for the guests! 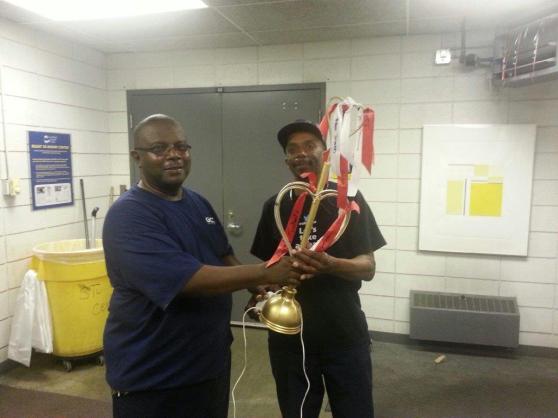 As we invite the community to join us at our 100th anniversary campus events this fall showcasing our great work, special billboards and ads also will be running to let people know that the college is celebrating 100 years of being a community partner in West Michigan. Here are two samples:

Paul Herdegen will be away next week. There will be no tae kwon do class on Thursday, August 14th. Class will resume as scheduled, on August 21st.

Victoria Janowiak, Chief Whitman, Jim Peterson, Quynh Pavlov and Melissa Davis visited In The Image this week to deliver a 100 Ways to Give commitment. The Finance and Administration team collected enough money for In the Image to purchase 100 pairs of shoes and also provided more than a 100 pairs of socks.

To learn more about GRCC’s 100 Ways to Give projects, click here. 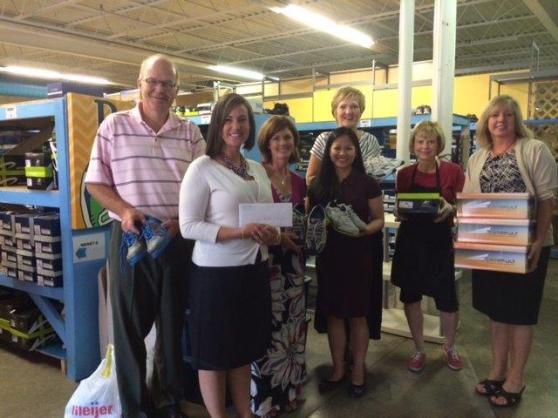 Bethann Egan and Karen Guthier, from In The Image, accept the 100 Ways to Give donation from Jim Peterson, Melissa Davis, Vicky Janowiak and Rebecca Whitman.