GRAND RAPIDS, MI – Grand Rapids Community College’s fall headcount has dropped again, but a late surge in enrollment helped keep the decline from being even steeper than expected, administrators say.

GRAND RAPIDS, Mich (WZZM) — A small community college in Oregon is in shock after a gunman killed at least 10 people and injured another seven. People around the country are asking how it could have been avoided, just the latest in a run of mass shootings across the country.

“I think this is won way before the point where someone picks up a gun,” says Grand Rapids Community College police lieutenant Jeffrey Hertel.

What are your thoughts on the new Donald Trump tax plan? CEO of Financial Gravity Holdings, Inc. John Pollock dives further into the matter. Water was recently discovered on Mars! Manager of the Chaffee Planetarium Ken Cott talks about the significance of the discovery. Lastly, it’s Manufacturing Week! We bring in Executive Director of the Tassell M-Tec and Workforce Training at GRCC Julie Parks to discuss the state of manufacturing in West Michigan. It’s a busy final day of September 2015 on West Michigan Live!

Silent Observer is reminding students of a program it’s established to prevent and solve school crimes here in Kent County. “Fast 50” began in 1998 and now exists in more than 60 middle schools and high schools, along with Calvin College and Grand Rapids Community College. 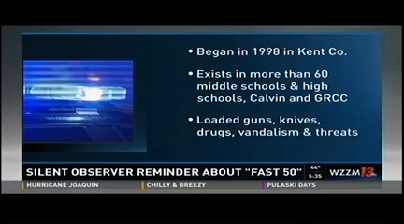 Capron’s top score helped Grand Rapids Community College shoot a team score of 293, which put them in first place for the tournament. It was the Raiders’ first tournament win this season.

Grand Rapids, MI- With a 3-0 sweep of Siena Heights at the Sturrus Sports & Fitness Center, the Aquinas College women’s volleyball team won its third consecutive league match. The win moved Aquinas into a three-way tie for sixth place in the league standings. Overall, the Saints improved to 8-6 on the season and to 4-5 in the WHAC.

A flawless first set gave Aquinas the early momentum. The Saints tallied a .407 attack percentage in the first set en route to the 25-11 victory. The next two sets proved to be more competitive, but the Saints hung on to win 26-24 and 25-22. Sophomore Cammy Means (Kentwood/East Kentwood) led the Saints with 11 kills, while Brooke Wieland (Lake Odessa/Lakewood) dished out 32 assists. Junior Katlyn Agren (Cadillac/GRCC) totalled 20 digs, while senior Anna Fencil (Jenison/Jenison) chipped in with a dozen.

When Marquez Gollman was attending Grand Rapids Community College, he stayed in a house that was falling apart piece-by-piece.