A new apprenticeship program that will be offered by a trio of community colleges in West Michigan beginning in January is aimed at creating careers in the health care field.

A report says there are thousands of international students on West Michigan college campuses contributing to a top-10 ranking for the state and several colleges’ study-abroad programs are among the nation’s most active.

PETOSKEY — Great Lakes Chamber Orchestra will bring the Messiah to Northern Michigan at 7 p.m. on Thursday and Friday, Dec. 17-18, at St. Francis Xavier Church in Petoskey. The Messiah has become a Christmas tradition, one which is eagerly anticipated every year. This year, in addition to conductor Libor Ondras, chorus master Peter Sims and the Great Lakes Chamber Chorus, three soloists will perform. Amy Cross, soprano, Katherine Jannakos, alto and Tom Cilluffo, tenor are the guest soloists.

… Alto Katherine Jannakos cannot remember a time when she hasn’t been involved in music. She comes from a very musical family, and early on studied music theory and flute. She didn’t start singing until high school, and later began serious voice study at Grand Rapids Community College. It was there that she discovered her gift and passion for classical vocal performance. After three years she left Grand Rapids Community College and completed her degree at Oberlin Conservatory. In addition to classical music Katherine loves Orthodox liturgical music. She has been music director at St. Paul’s Orthodox Cathedral in Dearborn Heights, Michigan for the past three years.

Locals strive to give hope, love to foster children

Holland, Mich. — Children who have been removed from their families and are struggling to find a place in the world are being taken in and taken care of in a variety of ways in the Holland area.

… (Amber) Clingman earned an associates degree in juvenile services from Grand Rapids Community College, and is finishing up a bachelor’s degree in social work at Grand Valley State University.

… Through EPIC, (Marisol) Ramirez obtained internships at Lakeshore Disability Network and Community Action House. A speaker from Grand Rapids Community College encouraged her to continue her education. This fall, she enrolled there and is on her way to an associate’s degree in social work.

Students get a Jump Start on College Applications

Wyoming Public Schools, MI — Felicia McCrary has an important role at Wyoming High School: help students get into college. She recently did just that, co-organizing a week of events during which 250 seniors sat down and applied.

… During English class, seniors in the Class of 2016 applied to colleges using Chromebooks, sent out transcripts and completed applications. Nearly every senior applied to Grand Rapids Community College.

MUSKEGON, MI — The Women’s Division Chamber of Commerce has announced the participants for its annual Dancing with the Local Stars charity event.

… The 2016 Dancing with the Local Stars participants include:

Sign up in the Student Life office or here (use “GRCC” as the sponsor code):

The latest schedule, for November 30 to December 6, for the College Channel includes a performance by the Grand Rapids Choir of Men and Boys. 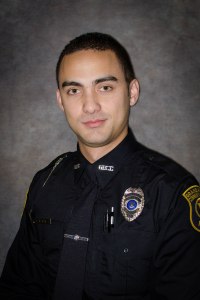 Thank you, Kam Robles, new GRCC Police Officer, for your recent gift to the GRCC Foundation. We thank you for your support of our college and our students!

You still have time to turn in your commitment for the 2015-2016 Faculty and Staff Giving Campaign. For just $20 a pay-period, you can also become a member of The 500 Club. Thank you to those who have already turned in your commitment. We are so grateful for that. The dollar amount isn’t as important as the commitment – the commitment to our students that shows our support of them. For more information about the campaign and The 500 Club, visit our website or contact Erin Cisler at ecisler@grcc.edu or x3931.

Dr. Robert J. Gosling, who became a physiatrist, specializing in physical medicine and rehabilitation, when the field was new, died Saturday of heart and lung failure in BrookHaven Retirement Community, Brookville, Ohio. He was 93.

… Dr. Gosling was a 1940 graduate of South High School in Grand Rapids and afterward enrolled in junior college.

Grand Rapids Community College’s Emergency Closing Procedures for 2015-16 have been updated. Please familiarize yourself with these procedures should, for any reason, the college need to delay opening, close early, or cancel services because of unforeseen circumstances such as winter weather, power outages, etc.

LAST CHANCE WORKOUT (before Thanksgiving) is today from 12:00-12:30 — Butts & Guts in the FIELDHOUSE BALCONY. All are welcome!

… (Alicia Stegink) Eppinga and (Leslie) Van Becker are principal cellist and violist of the Grand Rapids Symphony where (Melissa Chung) Hamlen is a member. (Mary) Scanlan retired from Grand Rapids Community College. All are active performers and teachers, and Eppinga presently teaches cello at Hope College.

#GivingTuesday celebrates the act of giving – on the Tuesday following Black Friday and Cyber Monday. On December 1, 2015, the Grand Rapids Community College family and community will come together for one common purpose: to celebrate generosity and to give. It is the opportunity to join more than 10,000 partners around the world in encouraging giving on #GivingTuesday. Just as the retail world has benefitted from coordinating national shopping days across many brands and platforms, #GivingTuesday does the same for organizations dedicated to serving our communities through philanthropy.

What does my gift on #GivingTuesday do for GRCC students?
Your #GivingTuesday gift directly impacts the lives of students by providing unrestricted dollars that go directly to support student scholarships. Your donation today helps to remove financial barriers for our students and moves us one step closer toward our goal of one day providing scholarships to all GRCC students in need. Your support of a student today is critical to the creation of our community leaders of tomorrow!

It is that time of year when GRCC experiences a rise in non-student, non-GRCC business related visitors in our buildings. In many cases these individuals are just looking to find a warm place to spend time and do not pose any risk to our campus. However, we also tend to see a rise in larcenies, and other nuisance type of incidents, especially in our parking ramps and restrooms. We had one of these situations last Friday in College Park Plaza. An employee had an expensive coat stolen from a coat rack, and a smelly old coat was left in the nearby trash can. Unfortunately, earlier in the day, a co-worker had actually seen what appeared to be a homeless man, with personal hygiene issues, walk into a men’s room on one of the upper floors. Campus police was not contacted, but about 30 minutes later the employee thought about it and asked to have someone on the floor look around for him. The person was gone by that time, but so too was the coat. This is not the first time employees have had items stolen from their office spaces. Please remember to keep all valuables secured and out of sight.

Please be aware of the people you see, and if you see something suspicious or someone that does not appear to belong on campus, either talk to the person or contact campus police right away. Many times, just asking the person, “Can I help you find something” or “What can I help you with,” will be enough to move that person along if they don’t belong. If you are not comfortable doing that, or they didn’t take the hint, just keep an eye on them and call campus police. We can be on scene within a minute or two and will assist them. If you have any questions please call Chief Whitman at X-4910.

Once again, at the Holiday Breakfast we are asking Employees to bring food to donate to the Food Pantry. We’d love to restock the pantry before Holiday Shutdown. Here is a list of most needed items:

Grand Rapids Community College’s Emergency Closing Procedures for 2015-16 have been updated. Please familiarize yourself with these procedures should, for any reason, the college need to delay opening, close early, or cancel services because of unforeseen circumstances such as winter weather, power outages, etc.

The classes that WILL meet next week are:

Have a wonderful Holiday!