Phi Theta Kappa raised close to $900 by holding a ice bucket fundraiser to benefit both ALS (amyotrophic lateral sclerosis) research and their trip to Nashville, Tenn., in April to present at the National Nerd Nation Conference.

… Police arrived to find Lamb lying in the parking lot outside the Hookah Lounge, who was pronounced dead at the scene. Lamb graduated from Holland High School in 2012 and went on to attend Grand Rapids Community College.

MUSKEGON TOWNSHIP, Mich. (WOOD) — The phones are ringing at college admissions offices all over West Michigan.

Pastry Chef Abby Metz came to the WZZM 13 Studio from Red Water Restaurants, with a recipe for flourless chocolate torte.

(This article doesn’t mention it, but Abby Metz is a SICE alumna.)

Even in 2016, it is still rare to see two men of color who do what they do, working in higher education. Although the two couldn’t be more different, there are many things Chris & Dre have in common. For instance, they both come from humble beginnings. They both graduated from Ottawa Hills High School, located in Grand Rapids, Mich. and they both have humble, laid back personalities. Nearly ten years apart in age, they are two professionals who have become more like brothers due to a shared focus and passion for helping students achieve.

… In 2012, after data indicated that African American males attending Grand Rapids Community College were statistical leaders in every category of failure, Alpha Beta Omega (ABO) was birthed as a response to the stark reality. ABO, a leadership development program was spearheaded by Dr. Andre Fields, Eric Williams and Chris Sain Jr.

GRAND RAPIDS — Five local leaders are hosting a joint mayors’ coffee for residents on Sept. 22 with public transit the topic of discussion.

The financial aid office and Lake Michigan Credit Union are presenting a budgeting workshop that is open to everyone. 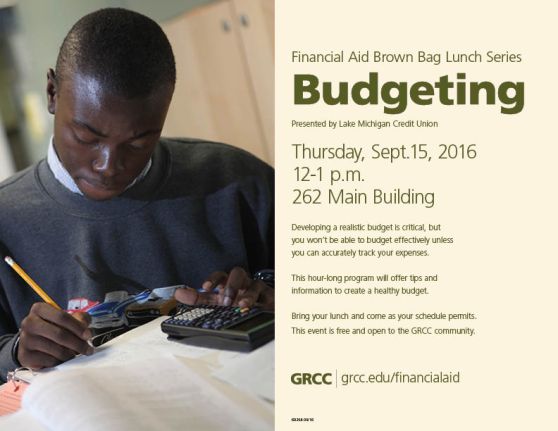 Thank you to all who completed our National Payroll Week Survey. The feedback provided will guide us in making decisions about future improvements, that we hope to share with you starting this fall.

The winners of the Campus Dining Gift Certificates are: Merrilie Benthin, Ann Isackson and Sherry Knoppers