West Michigan is one of the most economically healthy regions in our state. It’s been cited as the fifth fastest-growing city in the country.

… “You see private businesses that are working every day with Grand Rapids Community College, Grand Valley State University, Michigan Works! and having that open dialogue, saying ‘This not just what I have today in terms of needs for my workforce, but here’s what I’m going to need over the next three-to-five years,'” (Tim) Mroz said. “‘How can you help in your curriculum? How can you help in workforce training to really make those connections, and help us grow our talent pool so that my business can continue growing in the region?'”

Why mentoring is a vital add-on to remedial curriculum

… Remedial education is a growing part of the national conversation on college affordability, and it has attracted the attention of lawmakers in states and within the federal government. Campuses which show a commitment to enrolling low-income and minority students, but which don’t complement the enrollment strategy with direct outreach, stand to lose ground in graduation rates and poor internal reviews from students and faculty. Schools like Grand Rapids Community College use online assessment tools to help students self-determine the amount of time and resources they have to fully commit to pursuing a degree.

(One of the photos accompanying this article shows GRCC student Joseph Hileski touring the exhibit.)

… Jager was among nearly 150 who attended a People and Pets event at GRCC Ford Feildhouse Sunday, one of the most popular parts of Gilda’s LaughFest since 2010. The event featured activities including a parade, costume contest, blessing and other events for animal lovers and their companions.

Indians win 3 of 4 at Classic

The Chipola Baseball Classic over the weekend yielded mixed results for the 19-4 Indians.
While Grand Rapids Community College wasn’t able to gain any traction and went down 10-0 in flurry of runs on Friday, Saturday’s game against Louisiana State University Eunice saw a 9-2 loss for the Indians.

The GRCC men’s basketball team won the Region 12, District 9 Championship this past weekend, defeating Ancilla College 81-70. GRCC will now travel to Danville, IL. next week (March 21-25) for the NJCAA National Tournament and a shot at a national championship.

A Raider Salute from Tamber Bustance, of the Woodrick Center for Equity and Inclusion:

A special thanks to Sophia Brewer (Library and Learning Commons), Chris Sain (Counseling, Advising and Retention) and Raydale Bonivel (Alpha Beta Omega) for presenting at the Diversity Youth Partnership Youth Summit on Friday, March 10, 2017.  More than 250 8th grade students at Northview’s Crossroads Middle School attended the Summit, which was coordinated by GRCC’s Woodrick Center for Equity and Inclusion.  Sophia, Chris and Raydale inspired the students and represented GRCC very well!

Candor, March 14: Do you sometimes struggle to communicate in the clearest possible way? Research shows that people are the happiest in workplaces where there is a strong sense of “psychological safety”. One of the most important aspects of creating that safe culture is the practice of communicating with Candor. The problem is – most of us are terrible at it! In this workshop, we will explore candor – what it is and isn’t, how your brain’s wiring has everything to do with it and play with some strategies for getting better at it.

Emergency Response Orientation, March 28: The GRCC Emergency Response Framework outlines the policies, procedures and organizational structure for response to emergencies which impact or disrupt normal operations on the GRCC campus, from inclement weather and power outages, to major incidents. This session provides an overview of that framework; reviews roles and responsibilities of departments, functional groups and personnel during emergency situations; and reviews the various communication methods used in the event of an emergency. This session is appropriate for new employees or anyone interested in a refresher on GRCC’s plan to keep our campus, staff and students safe.

FMLA: What’s in it for you?, March 28: Have you ever wondered what the Family Medical Leave Act is all about? Have you ever wondered if you or one of your employee’s had a “qualifying event” but were afraid to ask? In this session you will learn the various ins and outs of FMLA, intermittent FMLA, and the GRCC FMLA policy. You will also learn what a qualifying event is for you or an immediate family member and what is covered while you are on leave.

Collaboration with the Brain in Mind, April 11: Today’s most successful organizations are those that maximize their abilities to think, learn and create in collaborative ways. The challenge is that true collaboration requires high emotional intelligence and communication skills, which are often lacking in diverse work teams. Getting under the hood and understanding how the brain works can provide a helpful model for influencing and collaborating with others. In this workshop, you will learn: Some basic concepts about the social nature of the human brain; Ways in which the brain works to manage threat and reward in the workplace; How to remove several common barriers to collaboration, and strategies for creating an environment that fosters collaborative relationship and thinking.

Everyone is welcome to the March 28 event!

The latest schedule, through March 17, for the College Channel includes Consuela Ward’s presentation for the Diversity Lecture Series.

The GRCC Faculty Association sponsored a team of 15 faculty runners for LaughFest’s FUNDerwear Run 2017, which took place on March 12. This 5k race goes through the streets of Grand Rapids with runners wearing their favorite, fun, and fancy undies. The GRCC Faculty Association also raised $1,125 and was recognized as the top fundraiser for the 4th year in a row! All the proceeds go to support the work of Gilda’s Club Grand Rapids and stays right here in our community.

Thank you to all who contributed to our fundraising efforts this year and thank you to the brave faculty who raced in their skivvies with temps in the 20s. Brrrrrr!

More photos can be seen online. 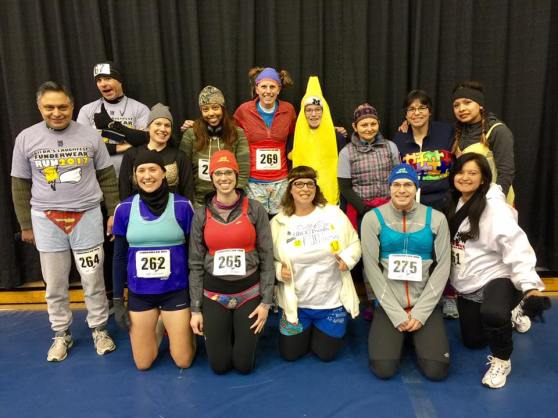 The Grand Rapids Community College Mathematics Department is pleased to announce that it will host its next Mathematics Seminar on Tuesday, March 14, 3:00-4:00 p.m. in 101 Cook.  Our speaker will be GRCC mathematics instructor Nancy Forrest, and she will discuss the number pi.  Her title and abstract are below.

Numbers, like people, are all special in their own way, but pi is one the very few numbers that has its own day.  Mathematicians, teachers, students and mathematical aficionados of all stripes will take a few minutes on March 14 to pause and reflect on a number that has fascinated (some might say obsessed) people for over 2000 years.  This talk will have something for everyone, so a high level of mathematical sophistication is not required.   Everyone is always welcome to our mathematics seminars.

One might argue that there is an infinite supply of interesting numbers.  But no other number has generated as much curiosity, international competition, and mathematical passion as pi.  Plus it even boasts a holiday; Pi Day is on 3/14. This talk will include highlights of the history of pi, how it was named, calculation of its value, and various ways people have memorized some of its digits.

The deadline for the submission of grant applications for the Instructional Improvement & Professional Development (IIPD) Grants program is 4:30 p.m., March 17, 2017.  Information about how to apply for an IIPD grant can be found at this website: IIPD Application and Guidelines. Please note that applications must include Dean’s and Department Head Approval forms, a budget form and budget documentation. If you have any questions about IIPD grants, please contact Judith Larsen, Director, Grants and Resource Development Department, at 234-3910 or jmlarsen@grcc.edu. Good luck!