Kelloggsville Public Schools, MI — On May 2, voters in the Kent ISD region will be asked to approve a 0.9 mill tax for local school districts, generating $211 per student to maintain programs, improve services and meet other needs. School News Network is offering information on what the millage means for each of the 20 districts in the Kent ISD. Today we focus on Kelloggsville Public Schools. SNN spoke with Superintendent Sam Wright.

We extend condolences to Nora Michael, from Facilities, upon the death of her son, Jalen Michael, on April 14.

Human Resources will be starting a new communication for our retirees. This idea was submitted via the PACE feedback meetings or the Community Luncheon sessions — so we thank you for your feedback on this opportunity to improve communications about our retirees.

The following adjuncts will be retiring from GRCC on Friday, April 29. With their permission and input, here’s some information about their teaching experience at GRCC:

Barbara has worked at GRCC as an adjunct instructor since January 2004.

She initially started teaching communication courses in the Language and Thought Department and then went back to grad school at WMU to get a M.A. in Counseling/Psychology. In 2007, she began teaching psychology courses for the Psychology Department at GRCC.

Here’s what Barbara shared with us about her teaching experience at GRCC:

“Over the years, I have met so many diverse, funny and inquisitive students that made teaching exciting and fun. Some classes were more memorable than others. In some of the classes the students and I ‘clicked,’ making the semester fly by. In some instances, I actually didn’t want the semester to end because the class was more like a colloquium where everyone shares ideas. In my retirement, I want to pursue painting and decorating houses. I’d like also to learn new skills and travel.  I’ve been privileged to work at GRCC with great faculty, department chairs and especially the students. I wanted to teach ever since I was in elementary school, so having the opportunity to teach students from all backgrounds and ages and learn from them has been a gift. Teaching at GRCC has truly been satisfying.”

Robin has worked at GRCC as an adjunct instructor since January 2001 in the Music Department, mostly teaching music theory.

Here’s what Robin shared with us about her teaching experience at GRCC:

“Several stories come to mind, most of which are examples of simple things that, when put together, help build the community. For example, a few years ago a student was knitting winter ‘Pokemon’ hats. Some students were wearing them to class and they were quite surprised when I asked her if she could make me a Charmander hat. I started naming the various Pokemon and we had fun taking a short break from music theory to discuss our favorite characters.  As an adjunct juggling more than one job, as well as family, I was not able to be as involved with students as much as I wanted. So it came as a surprise when, over the years, I would run into former students who remembered me. One student in particular talked with me several times after he was enrolled at GVSU and was struggling with ‘what to do with his life.’ Others are out in the world working as musicians or music educators and keep in touch. It’s just a delight to see what former students are doing, whether they continue in a music career or move on to something else. These encounters have made me feel like I was truly a part of GRCC even though I was only teaching part time.  Although I am retiring from GRCC, I am continuing to work my other part-time jobs because I’m not old enough, or financially sound enough, to completely retire! I’ve been a self-employed musician since I graduated from GVSC in 1979. Some of that employment is performing (a dozen or so events a month) but I also teach jazz studies at Aquinas College, at my home, and as a clinician at schools and festivals. This is my third year co-directing the Youth Jazz Ensemble program at St Cecilia Music Center as well as the third year of a jazz piano concert series I host at Fountain Street Church, called, Jazz in the Sanctuary [next concert is May 7]. I hope to find a little more time for family and friends now too!  I can’t even imagine what my life would have been like without these past sixteen years at GRCC. I am so grateful for being able to teach music theory, a subject I am just geeky about and love sharing. Although I was the teacher, I always felt like I was learning, too. I also have a deep appreciation and respect for my GRCC colleagues who have been wonderful to work with and I’m excited about attending future concerts in the newly renovated music building next year.”

Here’s what Susan shared with us about her teaching experience at GRCC:

“Nothing gives me greater pleasure than to see my former students achieve such wonderful things.  I recently was invited by one of my previous students to attend the Delta Pi Alpha dinner.  She is graduating from GRCC this semester and was recognized as one of the students to have achieved an overall 4.0 GPA.  How amazing is that!  After 17 years, I don’t think there is any doubt that I belonged to GRCC. My constant reminder is the number of times I have been out in public, such as at a restaurant or store, and have a student ask me, ‘Aren’t you a professor at GRCC?  I had you back when…..’  I have always had two jobs, but will for now have one. I’m looking forward to spending more time with my family, especially my five-year-old grandson.  I’m also going to travel more and visit my sister in Florida and my brother in California.  I have so enjoyed my time at GRCC.  I’m grateful for all the wonderful people I’ve been able to work with and socialize with, and also for the opportunity to be a part of so many students’ academic lives.  They have taught me so much!”

We would like to congratulate our adjunct retirees and thank them for their commitment and service to GRCC.  Their contributions to our students’ lives can never be measured.  Happy retirement!

The campus community is invited to celebrate with President Ender during a retirement open house on April 25. The open house runs 3-5 p.m. at The Heritage. 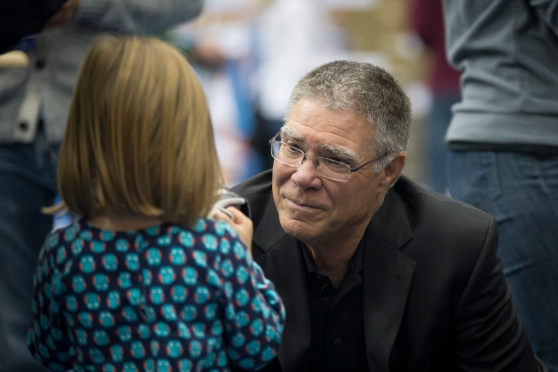