Morton up to task of directing Jets’ young, new-look offense

… Morton was a wide receiver in college, first at Grand Rapids Community College before going to Western Michigan. He spent some time playing in the CFL and was on a few NFL teams’ practice squads before turning to coaching.

(This article appeared in many other newspapers.)

The City of Cedar Springs may soon join the ranks of other progressive cities that are helping to support the environment by allowing residents to keep bees. The City Council will consider the first reading of the ordinance at their monthly meeting this Thursday, September 7.

City resident Joe Frank asked the city to consider allowing beekeeping in the city after finding out there was not a specific ordinance to address the issue. He has kept honeybees as a hobby for several years. He had several hives on property he owned in Hesperia, and when he decided to sell the property, he re-homed all of the hives, except one, with other beekeepers. He had previously asked a city official if he could keep a hive on his property here, and was told he could. He moved the hive to his property, but was later told that he couldn’t have it under the current ordinances, and so asked the city earlier this summer to consider it.

(Joel Frank is a technical operations technician in the ATC.)

It’s been a busy week for seismometers. This morning, at 12:49 a.m. Michigan time, GRCC’s seismic station (GRMI) recorded a magnitude 8.1 earthquake (see red arrow in image below) off the Pacific Coast of Mexico. See the United States Geological Survey’s shake map below for location of the main shock and shaking intensity. This was the largest earthquake ever recorded on our station. Preliminary reports are that there are casualties and building collapses in communities closer to the earthquake. Mexico City appears to have sustained little damage or injuries thanks to strong building codes (since the devastating 1985 earthquake) and an early warning system that gave residents about 40 seconds to move to a place of safety. See the New York Times article for updates on the impact and the USGS website for additional information about the earthquake and aftershocks. 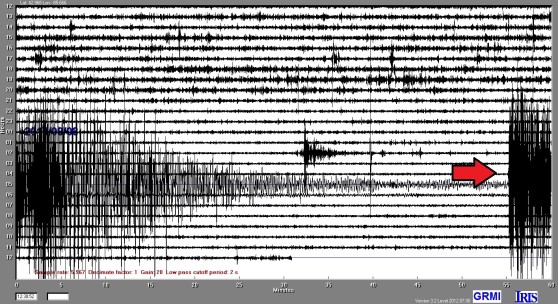