All geography programs at colleges and universities throughout Ohio and Michigan are part of the East Lakes Division of the American Association of Geographers, which held its annual conference in Ypsilanti on Friday, October 13.  Paper competitions are held at both the undergraduate and graduate levels for students willing to take on the challenge of having their independent research critically assessed by a judging panel made up of faculty from some of the region’s leading geography programs.

For her paper, “Tourism in the Caribbean: Utopian Ideal or Dystopian Disaster?,” Geography major Kara Jueckstock, who intends to graduate from GRCC in December, was awarded first place honors in the paper competition open to all students pursuing the baccalaureate. This appears to be the first time a community college student has been awarded honors at the regional meeting. Kara intends to transfer to Aquinas College in January 2018.

Also, Alyson Mabie, a 2013 GRCC graduate who took first place undergraduate honors at the annual meeting in 2014, was awarded first place honors reserved for the best paper presented by a graduate student pursuing the master’s degree for her paper, “Brewing on the Edge: The Economic and Community Impacts of Small Town Breweries on the Outskirts of Beer City, U.S.A.” Following completion of the M.A. at Western Michigan University, Alyson intends to pursue the Ph.D.

In the last eight years, GRCC Geography alumni have received eight awards for the stellar quality of the papers they’ve presented at this annual regional conference. 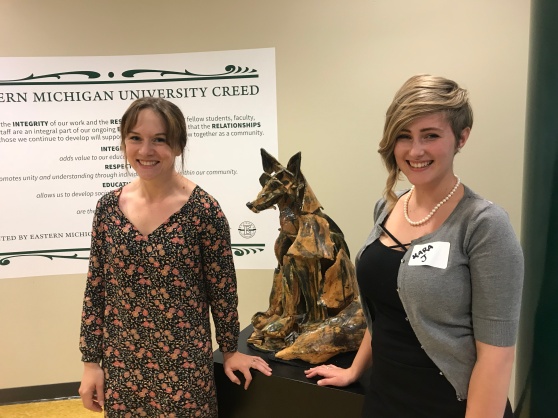