… Prior to gala, Andres Chavez is scheduled to give a lecture from 11 a.m. to noon in Room 168 of Grand Rapids Community College’s Wisner-Bottrall Applied Technology Center on “Millennials Putting into Action the Legacy of Cesar E. Chavez.”

The Greater Grand Rapids Figure Skating Club will be well represented at this week’s Eastern Great Lakes Regional Championships, as the program qualified 10 of its 30 skaters for the national event.

… Local skaters competing in the event are:

Tops of the conference

Before the start of Game 2 of the PBA Governors Cup Finals at the Smart Araneta Coliseum last Sunday, the Best Player and Best Import of the third conference were announced with the awardees representing the two teams playing in the best-of-7 title series.

… Then, (Allen) Durham enrolled at Grace Bible College, a small school in Grand Rapids, Michigan. He averaged 15.5 points as a freshman in 2006-07 then left the school to attend Grand Rapids Community College because of financial limitations. Durham, however, returned to Grace Bible in 2008-09 and led the varsity to three straight National Christian College Athletic Association Division II championships. In the process, he broke the school’s 44-year-old scoring record by becoming the all-time leader with 2,467 points. He also finished his career as Grace Bible’s all-time leading rebounder with 1,314 boards.

These sessions will provide an overview of health plans, FSA, H.S.A and optional benefits offered through Grand Rapids Community College.

This learning session will review the current employee reimbursement policy and will touch on topics related to travel reimbursements, mileage reimbursements, GSA Meal Per Diem rates, as well as Faculty Professional Development, and Tuition Benefit reimbursements for courses attended at other colleges or universities.

Participants will have an understanding of the function of a healthy heart and implications of lifestyle choices. They will be able to identify a personally appropriate physical activity that improves heart health and name two heart healthy food choices, and will commit to making one heart healthy food change.

GRCC is partnering with YWCA West Central Michigan to present a small display where you can write words of support or encouragement to survivors of domestic violence. When the cards are complete, they will be made available in a display to YWCA clients — survivors seeking services such as, emergency shelter, transitional housing, advocacy, counseling, or legal assistance will see the presentation. Clients will be encouraged to take messages that connect with them.

You will find the cards in the Bob and Aleicia Woodrick Center for Equity and Inclusion. To impact the greatest number of survivors, please feel free to include illustrations or notes written in any language. 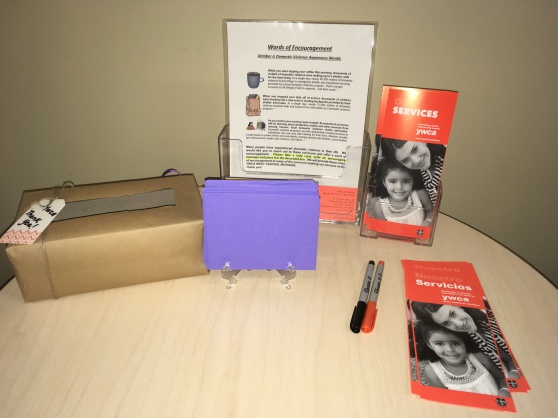 TRIO/SSS wants to thank the GRCC community for your sustained support of our Donuts and Apples fundraiser. Every year we have been able to cover the cost of attendance for a student to attend the Power of Education Foundation (PEF) School in Port-au-Prince, Haiti.

Because of your amazing generosity and support of TRIO’s Donuts and Apples fundraiser held every fall during late October, Mickerlange Abraham’s educational expenses have been fully covered for the last three years!

Now, Mickerlange has completed her 9th grade year, passed all her national exams, and moved to attend high school. She sent a thank you message to all of us.

This is a photo of Mickerlange taken just two weeks ago by Jen Masternak, director of communications for the Power of Education Foundation on her recent visit to the school. Jen also extended her thanks to GRCC: “I would like to say a huge heartfelt thank you to everyone who supported the fall fundraiser. Mickerlange is a very determined young woman who continues to work hard to her goal of becoming a journalist.”

During the month of October 2017, the Department of Homeland Security offers weekly cyber security themes to aid in user awareness regarding current cyber threats and corrective responses to such threats. The GRCC IT Security team is hosting relevant security information on the IT Security webpage. Be sure to check it out weekly and remember, with all the current security breaches going on across the country, “don’t get scared…. get secured.”

Smart cities, connected devices, digitized records, as well as smart cars and homes have become a new reality. Week 3 will remind citizens that their sensitive, personal information is the fuel that makes smart devices work. While there are tremendous benefits of this technology, it is critical to understand how to use these cutting-edge innovations in safe and secure ways.

The latest schedule, through October 20, for the College Channel includes the ArtPrize panel.

The goal of the Mental Health and Wellness Resource Fair is to raise awareness among students about mental health resources and to encourage them to seek help when they hit roadblocks or have a life crisis that is creating barriers to their success.

The Grand Rapids Community College Mathematics Department is pleased to announce that it will host its October Mathematics Seminar this Wednesday, October 18, from 3-4 p.m. in 103 Cook.

This presentation will appeal to a wide range of students and faculty.  Much of it requires no understanding of mathematics beyond arithmetic.  All are welcome!

Our speaker, GRCC Mathematics Instructor Andrea Hayes, will discuss division by zero in various forms of mathematics from basic arithmetic to higher-level mathematics.  For the title and abstract of Andrea’s talk, please see below:

Division by zero is often confusing and misinterpreted.  Is (1/0) undefined or infinity?   The answer often depends on who you ask and can lead to lively discussions, even arguments.  The source of such discussions usually resides in the difference between actual division by 0 and what happens when the denominator approaches zero.  This talk will provide an in-depth look at the complexity of division by zero at various levels of mathematics.

GRCC students who participated in the summer MICUP program at Michigan Technological University, UROP at the University of Michigan, and the Study Away trip to Salamanca, Spain, will exhibit their research from 11:30 a.m. to 3:30 p.m. Wednesday, October 25, in the Raider Grille.

Learn about their work and the amazing opportunities that might be there for you! Snacks will be provided.