Dr. Bill Pink is Grand Rapids Community College’s 10th president, replacing Dr. Steven Ender who retired in May. Pink has been with GRCC since 2015, having served as the college’s vice president and dean of workforce development. Prior to GRCC, Pink was vice president of academic affairs at Oklahoma State University. An educator for 25 years, Pink’s background includes an associate degree from York College in Nebraska, a bachelor’s degree from Oklahoma Christian University, a master’s degree from the University of Central Oklahoma and a doctorate from the University of Oklahoma. Pink spoke with MiBiz about the need for GRCC to stay relevant for employers and how the college is designing courses to make that a reality.

‘My Life as a Zucchini’ film showing

As part of the Tournées French Film Festival, Grand Valley State University, in conjunction with Grand Rapids Community College and their respective French sections, will be co-presenting the film “My Life as a Zucchini,” or “Ma vie de courgette.” The showing will be held on GVSU’s Pew Campus in the DeVos Centers Loosemore Auditorium on Wednesday, Nov. 15, starting at 7 p.m.

(Representatives of the City of Grand Rapids, urban development organizations and leaders of social organizations led the meeting.

More than 300 people have died and thousands were injured in a magnitude 7.3 earthquake that struck along the border of Iraq and Iran Sunday night. The location of this earthquake is along a fault where two tectonic plates meet (the Arabian and Eurasian plates). Historically this region has sustained multiple large earthquakes, including a magnitude 7.4 in 1990 that caused over 40,000 fatalities and left more than 600,000 homeless. The GRCC seismometer recorded the Iraq-Iran earthquake as well as a magnitude 6.5 earthquake in Costa Rica. For more information about this and other earthquakes, go to the United States Geological Survey’s comprehensive website. 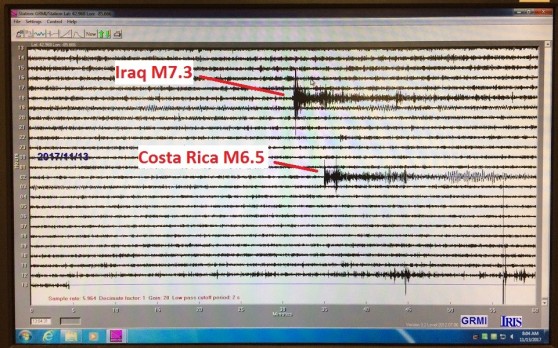 The latest schedule, through Nov. 17, for the College Channel includes author A. Brad Schwartz’s presentation on fake news.

The bookstore is having a two-day sale from November 14 to 15.

The GRCC MI-ACE Women’s Networking Group would like to thank our GRCC Community for their contributions to the Sock Drive. We collected 740 pairs of new socks. We will be giving 185 pairs of socks to four organizations including:

Again, thank you so much for your generosity. Blessings!

The French programs at GRCC and GVSU continue with the second annual Tournees Film Festival this month!

Admission to all the films is free, and everyone is welcome.