GRCC basketball coach Luke Bronkema leaves the program
3/25/19 MLive
Luke Bronkema, coach of the Grand Rapids Community College men’s basketball team the past three seasons, has left the team to focus on his family, according to a release from the school.

San Diego Chef Tim Kolanko Leaves Blue Bridge Hospitality For New Role At Urban Kitchen Group
3/25/19 sandiegoville.com
We announced earlier this year that longtime Urban Kitchen Group Corporate Executive Chef Joe Magnanelli was leaving the hospitality company to take the helm at Brian Malarkey’s incoming Animae luxury Asian fusion restaurant. We now know that the restaurant collective behind Cucina Urbana and others has hired Tim Kolanko to fill the open position. Kolanko has been leading the culinary operations for more than 6 years at Blue Bridge Hospitality (Stake Chophouse, Leroy’s Kitchen, Liberty Public Market).
Chef Tim Kolanko boasts more than two decades of culinary experience working under some of the most respected chefs in San Diego and beyond. A graduate of the Culinary Arts program of Grand Rapids Community College, Kolanko spent months backpacking throughout Europe before joining the kitchen at the highly-acclaimed Tapawingo restaurant in Michigan in 2000. Kolanko went on to move to Aspen for a short stint before relocating to San Diego in 2002 to cook under The Lodge at Torrey Pines referred Executive Chef Jeff Jackson. In 2005, Kolanko was promoted to Chef de Cuisine of A.R. Valentien where he spent seven years honing his skills in Califoria [sic] cuisine. In 2013, Kolanko was named Executive Chef of Blue Bridge Hospitality, where he managed the kitchens at the companies many concepts, including Leroys Kitchen + Lounge, MooTime Creamery, Village Pizzeria, Lil Piggys Bar-B-Q, Coronado Coffee Company, Liberty Public Market, Stake Chophouse, West Pac Noodle Bar, Maretalia, and El Roy’s.

WTMC cultivates college success, personal growth
3/25/19 The Washtenaw Voice
Washtenaw Technical Middle College (WTMC) was established in 1997 and gives high school students a unique learning experience that allows them to graduate with up to 80 college credits.
… Although the concept of a technical middle college — commonly referred to as an early middle college — is relatively new, similar programs are seen throughout the state of Michigan. Eastern Michigan University, Central Michigan University, Grand Rapids Community College and Kalamazoo Valley Community College are a few examples of colleges in Michigan with resources available to high school students extending beyond dual enrollment.

Ryan Brady takes 20-year detour to Saginaw Valley State football program
3/26/19 MLive
SAGINAW, MI — After 20 years, Ryan Brady can finally call himself a Cardinal.
… He jumped into coaching, with high school stops at Muskegon, Chesaning, Montrose and Perry and working on college staffs at Grand Rapids Community College, Grand Valley and Ferris, where he has coached the past seven seasons.

The City of Grand Rapids has announced street and parking lot closures for Thursday as part of a large event at Van Andel Arena. The event is scheduled to begin at 7 p.m.

The immediate streets around Van Andel Arena, 130 Fulton St. W., will be closed starting at 2:30 p.m. Thursday, March 28. The street closures are expected to last until about 8:30 p.m. They are:

The Area 2 lot on Oakes Street SW and Area 3 lot on Ionia Avenue SW will be closed to all users starting at midnight Wednesday through midnight Thursday. All access cardholders for these lots will have access to the Louis Campau ramp on Monroe Avenue NW and McConnell Ionia lot on McConnell Street SW during that time.

Metered parking will not be allowed in the following areas:

The event is expected to draw between 10,000 and 12,000 attendees. With road closures and additional motorists and pedestrians, downtown travelers can expect heavy traffic and possible delays.

Personnel from the Grand Rapids and Wyoming police departments, Kent County Sheriff’s Department, and Michigan State Police will be on hand to direct traffic and help ensure the public’s safety. 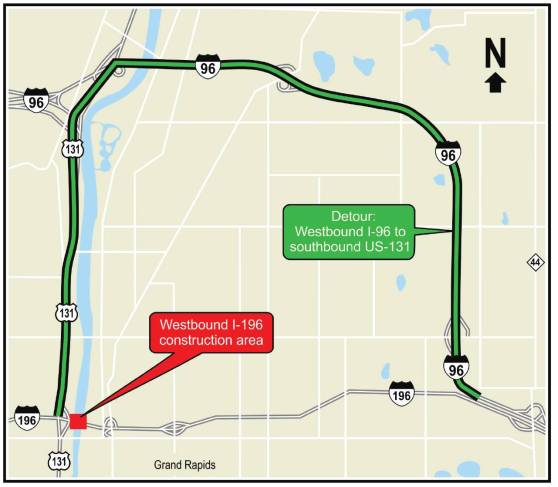 Starting this Monday, April 1, the Michigan Department of Transportation will begin a construction project to reconstruct and widen Westbound I-196 over the Grand River.

A complete closure of Westbound I-196 from Ottawa Ave to Lane Ave will be in place from April-August.

Please note: Westbound I-196 will be open to the Ottawa Exit, but all remaining traffic on WB I-196 MUST EXIT AT OTTAWA.

Thank you to all staff who represented 34 of our academic and service departments this past Saturday at our annual Spring Open House.  We loved seeing the interaction between you and these new and prospective students.  We had over 700 folks on campus Saturday.

Look for an email soon on dates for the Raider Rally and the Fall Open House!  We’d love to have your departments represented at these events.

A special shout out to Bayard Brooks, Becky Yoder, and Luba Petrash for helping us with setup and food!

The Grand Rapids Community College Mathematics Department is pleased to announce that it will host its next Mathematics Seminar tomorrow from 3-4 p.m. in 102 Cook.

Linear Programming, developed in the 1940s to help with the war effort, found many uses in the post-war economy.  With the principle goal of allocating resources in the best possible way, it continues to find important applications in areas as diverse as airline crew scheduling, creation of investment portfolios, and developing communications networks.  It also possesses inherent mathematical beauty, and its fundamental principles are accessible to anyone who can graph lines and find points of intersection.  As is the case with all of our seminars, everyone is welcome!

The Simplex Method is used to optimize logistic problems such as transportation scheduling.  In this talk, we review some history and insight into the method from geometric and vectorial points of view.

This talk is suitable for anyone with an intermediate algebra background. 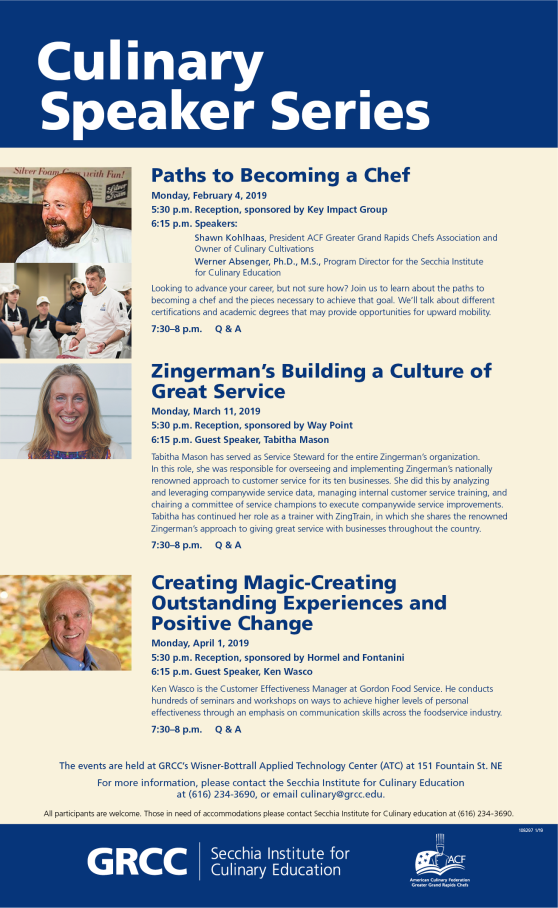 For more information, please contact the Secchia Institute for Culinary Education at (616) 234-3690, or email culinary@grcc.edu.

All participants are welcome. Those in need of accommodations please contact Secchia Institute for Culinary education at (616) 234-3690.