… Fulton spoke at Grand Valley State University and Grand Rapids Community College on Monday. There will be another event at 10 a.m. Tuesday at Davenport University’s Lettinga Campus in Grand Rapids.

The half-hour march began at the college’s Ford Fieldhouse at noon and ended there with a program led by Bert Bleke, chairperson of the GRCC Board of Trustees, and Jaedah Pickens, president of GRCC’s Black Student Union.

… Other recent innovations include:

… Grand Rapids Community College has launched its new iPhone app to make the colleges information as close as a students fingertips.

(This is a guest column by former state Superintendent Tom Watkins.)

For Michigan author Maryann Lesert, an accurate portrait of the fracking industry only comes from years of visiting well sites, researching scientific literature, attending oil and gas land-leasing auctions and talking to residents who can see 100-foot-tall drill rigs from their backyards.

… Lesert, 51, began her professional writing career as a playwright, publishing and producing several plays after her first in 1998. She is an associate professor of English at Grand Rapids Community College. Pursuing the fracking industry is part of Lesert’s lifelong interest in the environment, social justice and the sciences. And seeing, not just reading, is what Lesert says has been a vital component of Threshold.

Roland Gani, a longtime faculty member in the English Department, died this week.

Visitation is scheduled for 2-4 p.m. and 7-9 p.m. Friday at Matthysse-Kuiper-DeGraaf Funeral Home, 4145 Chicago Drive SW in Grandville. The funeral will be 11 a.m. Saturday at Sunset Park Church of God, 3450 Michael Ave. SW in Wyoming.

The Diversity Learning Center is pleased to collaborate with the English Department in providing opportunities to engage with Diversity lecture Series Speaker, Dr. Elaine Richardson.

Wednesday, Nov. 12, 2014 at 7pm – you, your students, and community members are invited experience Dr. Elaine Richardson’s performance/lecture and book signing

Professor in the department of Education and Human Ecology, Dr. Elaine Richardson aka “Dr. E” is a multidimensional personality: professor, performer, author and mentor are just a few of the ways she gives back and gives thanks. Her message is empowerment through education, and knowledge of self and history. Her motto: “Ignorance, low self-esteem and shame are killers. When you know who you are, nobody can control you.” 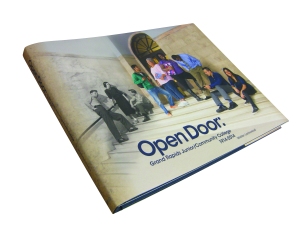 Author Walt Lockwood, a retired GRCC English professor, interviewed dozens of GRCC/GRJC retirees during the past year while conducting research with Mike Klawitter, GRCC reference librarian-archivist. GRCC’s century is presented in 10 full-color chapters, each highlighting significant events and people who contributed to the college’s inception, growth and success. An extensive timeline and sidebar story accent each chapter. Several appendices of boards, award recipients, program accreditation and full-time employees, along with a bibliography and index, complete this book.

Copies of the book that are signed by Lockwood are also available. The cost is $40, including tax, and cash, check, credit cards and RaiderCard will be accepted for payment.

Advising will be held on G2 in the Main Building.

There is no need for an appointment. Please stop by so we can meet you and discuss your classes and your academic plans.

We look forward to seeing you there!

One hundred years of GRCC’s distinct history is presented in 10 full-color chapters, each highlighting significant events and people who contributed to the college’s inception, growth and success. An extensive timeline and sidebar story accents each chapter. Several appendices of boards, award recipients, program accreditation and full-time employees, along with a bibliography and index, complete this book.

The book was researched, written and produced by current and former employees. Author Walt Lockwood, a retired GRCC English professor, interviewed dozens of GRCC/GRJC retirees over the last year while conducting research with Mike Klawitter, GRCC reference librarian/archivist. Mike, who managed the project, also provided the archived images, timeline and half of the sidebar stories. As each chapter was completed, it was passed to Jan Ensing, GRCC graphic designer, who provided the layout and design. Mike and Jan each relied on their co-workers and colleagues from across campus to assist in bringing this huge undertaking to completion.

Copies of the book that are pre-signed by Walt are also available. The cost is $40, including tax, and cash, check, credit cards and RaiderCard will be accepted for payment. 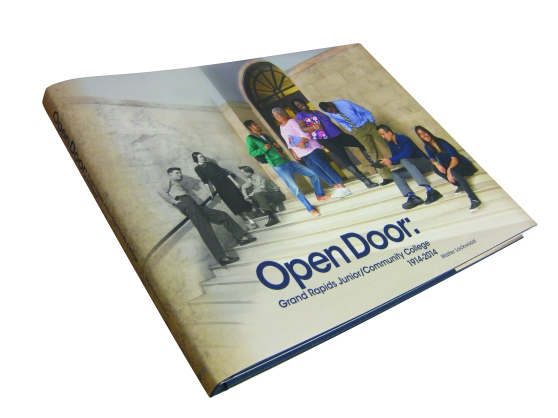 GRCC is hosting about 200 English faculty Thursday through Saturday for the Two-Year College English Association Midwest Conference. Many GRCC English department faculty members are attending and presenting, and Dean Laurie Chesley will speak at a luncheon during the event, which was last held in Michigan in 2000. Twelve Midwest states and Manitoba, Canada, are included in the region covered by the organization.

The English department’s full-time and adjunct faculty worked to collect more than 100 books for the GRCC Laboratory Preschool. The donation was presented at the preschool’s 40th anniversary celebration — which was held during GRCC’s 100th anniversary community picnic on Saturday.

Thanks to the English department’s Kim Wyngarden, Joan Gearns and Megan Coakley, who coordinated the project, and to Tali and Davita (the daughters of Rachel Lutwick-Deaner), and Ellie Coakley (a preschool student and daughter of Megan Coakley) who helped to deliver the books.

Missed the chance to help with this project? Don’t worry — many other 100 Ways to Give projects are still taking place. Click here to learn more.

Here are some of the 100 Ways to Give projects that have been organized for September:

Our drop boxes are being set up this week! You can drop off items being collected for 100 Ways to Give projects — to drop boxes at:

GRCC’s Finance & Administration management staff plans to provide 100 hours of job shadowing this October. If you know students who might be interested, have them e-mail the Purchasing Department by September 19 at purchasing@grcc.edu to find out more.

GRAND RAPIDS, MI – As news of Maya Angelou’s death spread Wednesday, educators throughout West Michigan recalled how they and their students were impacted by the work of the African American poet.

… Mursalata Muhammad, an English teacher at Grand Rapids Community College, was saddened by Angelous death, saying it was her goal to one day meet the famous writer.

(Article is a recipe.)

… Chef Terri Rees specializes in intimate dinner parties, culinary classroom education, demonstrations and select speaking engagements. She is passionate about your food and her mantra is “a personal chef experience.” After spending 25+ plus years in corporate America in sales and project management she returned to Grand Rapids Community College graduating from their prestigious Culinary Arts Program. She has shared her lifelong passion for food in several area businesses: Assistant Catering Chef for corporate fine dining at Bissell Corporation; Chef at Steelcase Corporation’s executive dining facility at historic Meyer May House; Sous Chef at Davenport University. Chef Terri I Rees is a featured instructor at Spartan Stores Culinary Classroom, Rylee’s Ace Hardware and Frederick Meijer Gardens. She also volunteers in local food-oriented programs, teaching selection and preparation of healthy food for MSU Extension’s Cooking Matters, Family Network of Wyoming, and other organizations. She has been named the 2013 Chef Educator of the Year from the American Culinary Federation of Grand Rapids and has been featured in Parade Magazine.

KALAMAZOO, MI — Joe Carbone said he wanted to stay as local as possible when building the Kalamazoo Growlers’ inaugural roster and for the most part it was mission accomplished for the team’s first manager.

There is no need for an appointment. Please have your students stop by so we can meet them and discuss their classes and their academic plans.

There is no need for an appointment. Please have your students stop by so we can meet them and discuss their classes and their academic plans.

There is no need for an appointment. Please stop by so we can meet you and discuss your classes and your academic plans.

College notes: Joel Rietsema goes from MIAA’s top 800 runner to one of the guys at GVSU track

… Mike Cupples, Grand Rapids Community College: GRCC, coached by Cupples, is ranked 17th in the NJCAA Division II preseason poll. The Raiders, who won the NJCAA Region XII Tournament and qualified for the National Tournament last year, finished the season with a 28-28 record.