1 adjunct, 3 colleges and a look inside the life of part-time professors

… He’s teaching seven courses this semester – three at Grand Rapids Community College, two at Aquinas and two at Kendall College of Art and Design. Between the classwork, there’s lesson plans to craft, meetings to attend and lots of papers to grade.

… FUNderwear Run – Victoria’s Secrets are secrets no longer at LaughFest’s FUNderwear Run through the streets of downtown wearing your underwear as outerwear over your running clothes. The 3.1 mile trek, at 10 a.m. March 8, is a fundraiser for Gilda’s Club Grand Rapids and ends with LaughFest’s “People and Pets” at Grand Rapids Community College’s Ford Fieldhouse.

Geneva, OH- The Aquinas College indoor track & field team’s are ready to compete at this weekend’s NAIA Indoor National Championships, held in Geneva, Ohio. Coach Dave Wood will lead a group of 28 student-athletes down to the Spire Institute. The Saints will look for strong performances and personal bests in a variety of events.

… On the women’s side, Erika Heston (Haslett/Haslett) and Tori DeSira (Dewitt/GRCC) will compete in the 60 Meter Hurdles.

… “I went to GRCC for three years and I was in between schools,” he said. “One of my friends came out here for an open gym, so I tagged along. After the first three shots I took, the coach said he wanted to recruit me since I am big and I can shoot, too.”

Lady Vikings fall on the road

… Teams register and begin racing at GRCC Ford Fieldhouse, 111 Lyon St. NE. Those wishing to preregister can do so online.

A Raider Salute from Julie Otte:

Huge Shout Out and High Five to the employees at the Ford Fieldhouse, Media Technologies and Creative Dining for all of their tireless help and work to make the Holiday Breakfast a success! It’s a little-known fact that it takes an entire village to put on a Holiday Breakfast – and I’m so grateful for those who helped!

For faculty and staff who like to work out at the Ford Fieldhouse during the day, here is the fall 2014 Open Activity Schedule, which shows the best times to come and use different areas of the facility.

Aubrey Sinn’s most high-profile acting job was one of her easiest to land. One day, she was auditioning for Orange is the New Black, and the next day, she had the role.

… She studied acting at Grand Rapids Community College, and credits instructors Tom Kaechele and Mark Amenta for honing her methods. Ten years ago, she moved to New York City to attend New York University’s Tisch School of the Arts, graduating as a drama major. Her first role after college was for a musical theater festival, playing the Hero character in About Face, a version of Shakespeare’s Much Ado About Nothing, set in the 1950s.

A national conference for a group of African-American law enforcement executives is coming to town.

… During the conference, more than 200 students from West Michigan will have the opportunity to speak with law enforcement, discuss potential career opportunities and tour the campuses of Grand Rapids Community College and Grand Valley State University’s downtown campus.

All GRCC employees, retirees, and spouses/children of employee who are GRCC health club members should complete a new health club application by July 31. This is to ensure that our records are accurate and to verify your intent to continue to use your complimentary membership. This will now be required on an annual basis but your access to the health club continues to be at no cost to you! If you will not be on campus during the summer you may want to request a health club application be interofficed to you this week. Anyone who does not return an application by July 31 may lose their locker and locker room access after that date. Call 234-3990 to request an application via interoffice mail or stop by the FFH Courtesy Window to complete a new one.

As originally posted in April, all GRCC employees, retirees, and spouses/children of employee who are GRCC health club members should complete a new health club application by July 31. This is to ensure that our records are accurate and to verify your intent to continue to use your complimentary membership. This will now be required on an annual basis but your access to the health club continues to be at no cost to you! Anyone who does not return an application by July 31 may lose their locker and locker room access after that date. Call 234-3990 to request an application via interoffice mail or stop by the FFH Courtesy Window to complete a new one.

A GRCC student found herself in a serious situation after taking WE 156 with Mike Boerman. Here is what she did to apply the knowledge she learned in class:

Hi my name is Hope Warren and I was in your M&W First Aid class this past semester. I just had to drop you a line to thank you. My son recently choked on a penny and because of you I was able to stay calm and do what I needed to do. I had to perform CPR on my baby; it was one of the most difficult situations I have ever been in, but because of your class and your voice in my head I was successful and my son is okay. Thanks again for stressing how serious this class is to our everyday life.

… Since the program has been implemented, the participating schools have seen a near 10% increase in academic acceleration, a 5% decrease in chronic absenteeism and an over 20% increase in expected growth targets in math and reading. As a way to celebrate the program’s success thus far, a special celebration for all currently enrolled Challenge Scholars will take place on Tuesday, May 6 at Grand Rapids Community College’s Ford Fieldhouse.

Hi-ho, Silver Line! When all is said and done, it is possible that one of the greatest recent economic development catalysts Grand Rapids has seen will arrive by way of bus.

… Part of the process meant being sure to touch economic hotspots like 54th and 44th streets, Venema said, but it also meant marketing to both Silver Lines customers and its neighbors. One of the biggest factors is higher education, he said, adding that BRT officials spent a lot of time discussing how such a corridor could help students attending downtown Grand Rapids colleges, such as Grand Valley State University and Grand Rapids Community College. The Silver Line could benefit the schools by allowing students to reach their destination without the need of a car, meaning schools could spend less on providing parking and instead spend more on the programs offered, he said.

A Raider Salute to the volunteers at Ford Fieldhouse, who did an amazing job getting everyone inside and seated for the commencement Friday. We couldn’t have done it without them! 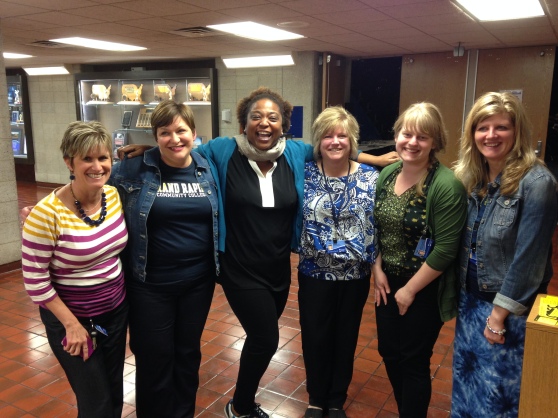 All GRCC employees, retirees, and spouses/children of employee who are GRCC health club members should complete a new health club application by July 31. This is to ensure that our records are accurate and to verify your intent to continue to use your complimentary membership. This will now be required on an annual basis but your access to the health club continues to be at no cost to you! If you will not be on campus during the summer you may want to request a health club application be interofficed to you this week. Anyone who does not return an application by July 31 may lose their locker and locker room access after that date. Call 234-3990 to request an application via interoffice mail or stop by the FFH Courtesy Window to complete a new one.

GRAND RAPIDS, MI — It isn’t every day a photographer in Grand Rapids gets to shoot Jay Leno, Betty White or Martin Short.

Winning. The process manifests itself in the shiniest of ways inside the Grand Valley State University Fieldhouse foyer as well as any at the NCAA Division II level.

… Detillion went to work by bringing in a number of arms from nearby junior colleges, including Aaron Jensen from Grand Rapids Community College and Evan Nietfeldt from South Suburban Community College in South Holland, Ill.

GRAND RAPIDS, Mich. – Tyler Baar may have been born to play baseball.

Goose Pond Colony Resort and Golf Club will host 13 golf teams from universities and community colleges across the nation at its 13th Annual Ron Marshall Spring Fling Golf Tournament, which will begin today and run through Saturday, March 22.

LaughFest 2014: The best Grand Rapids and Michigan jokes at the fourth festival

GRAND RAPIDS, MI — LaughFest 2014 comedians Jay Leno, Jim Gaffigan and Maria Bamford grew up in Massachusetts, Indiana and Minnesota respectively, and they tour all over the United States.

Grand Rapids Community College wellness professor Melanie Schiele-Gady has earned the Faculty-Staff Community Service Learning Award from Michigan Campus Compact, a coalition of college and university presidents who are committed to fulfilling the public purpose of higher education. The biennial award goes to those who have made the most outstanding contributions to service learning and community service. Students in Schiele-Gady’s wellness classes work with elementary schools in the Grand Rapids district on a healthy living curriculum.

Michigan’s Best Doughnut contest: Apple fritters at Meyers’ Bakery in Lake Odessa not to be missed

LANSING — Meyers Hometown Bakery and Beanery finished a close second in mid-Michigan’s Best Doughnut poll and has become a staple in the small town in Ionia County.

… (Jeff) Meyers has always had an eye on cooking and baking. After graduating from high school, he attended the culinary arts program at Grand Rapids Community College before taking his first food service job.

GRAND RAPIDS, MI — If you saw folks running around downtown acting strange on Sunday, fear not. It was all in good fun.

… The event began and finished at the Grand Rapids Community College Ford Fieldhouse. It ran noon to 4 p.m.

Rent, food, clothing, heat – these are essential costs for living in West Michigan. But what if a family’s income isn’t enough to cover these costs?

Access of West Michigan’s upcoming poverty simulation workshops will seek to initiate participants into the knowledge of what it’s like for the working poor to balance their budget with their incomes. The workshops progress participants through four 15-minute “weeks” where they play the role of a low-income person approaching stores and agencies to acquire goods and services considered essential. One will be held at Davenport University on March 24 and one will be held at Grand Rapids Community College on March 31. Workshops are intended to “sensitize participants to the realities faced by low-income people and motivate them to become involved in activities which help reduce poverty in our communities,” according the organization’s website.

WASHINGTON, March 13, 2014 /PRNewswire-USNewswire/ — Kids in Michigan will stand up against tobacco on March 19 as they join thousands of young people nationwide for the 19th annual Kick Butts Day. More than 1,400 events are planned across the nation. (See below for a list of local events.)

… The Grand Rapids Urban League and the Urban Fellows will host a Kick Butts carnival at Grand Rapids Community College to raise awareness of the harmful effects of smoking, and how African Americans and youth are specifically targeted by tobacco companies. The carnival will also commemorate the anniversary of the Surgeon General’s report. Time: 11 AM. Location: Raider Grille, 143 Bostwick Avenue Northeast, Grand Rapids. Contact: Lisa Butler (616) 633-6788.