We would like to extend an invitation to the GRCC Photo Student Exhibition and a Reception to honor our student photographers and Juan Fernandez who has served as mentor to many of them during academic year 2014-2015. Juan Fernandez, a GRCC alumnus, has served our students on a one year temporary full-time appointment and has contributed to their artistic growth. Please join us to wish him well on his new endeavors and to recognize his contributions to GRCC.

… For the past seven years, Grand Rapids Community College police officers used a form of body cameras that were connected to the police department’s radio system. The college phased out the cameras after they began to interfere with the college’s new radio system.

Gallery Guide: Exhibitions for the month of December

We suggest you call in advance regarding specific details. Information in this guide is subject to change without notice.

When trying to incorporate a large group of newcomers onto your team, a few bumps in the road are expected.

… Since then however, it seems to have finally turned the corner, avenging a loss to Grand Rapids Community College with a 93-85 victory last Tuesday and following that up with an 87-53 blowout of the Lake Superior State University JV team on Monday. With the wins the Lakers are now 2-6.

The Paul Collins Art Gallery will be hosting the opening reception of “A River Without Banks,” paintings by Benjamin Duke, tonight from 5-7 p.m. The collection will be shown from Oct. 27 to Dec. 5. The gallery is located on the 4th floor of the Main Building, and is open from Monday-Thursday from 10 a.m. – 7 p.m. and Friday from 12-3 p.m. For more information on the gallery or the exhibit, contact Filippo Tagliati. 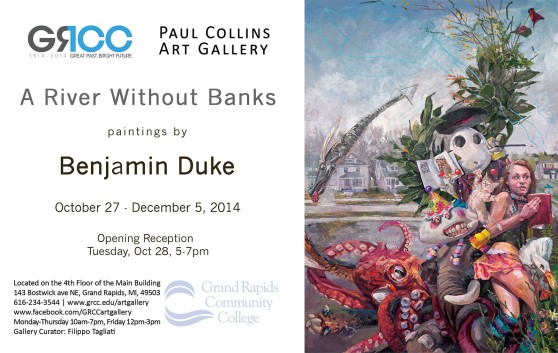 Inside Track: Chef turns his focus to teaching life skills to local youths

The charred remains of Tommy Fitzgerald’s boyhood home have served as an unlikely spark for helping to steer teens lives in a constructive direction and the reason he recently closed his downtown café.

… Kitchen Sage’s six-month after-school mentorship for teens is held inside the Basilica of Saint Adalbert’s kitchen. It includes internships and externships, such as learning to serve as a host, wait tables at a local eatery, or work with social media. Upon completion, the teens can earn a ServSafe Food Handler Certification and potentially a scholarship to Grand Rapids Community College’s culinary program or some other higher learning institute.

GRAND RAPIDS, MI — ArtPrize, the world’s largest art prize, has the clout to change lives with its twin $200,000 grand prizes.

… Tracy Snelling, who entered “The Stranger,” a short film about a man who wanders the world, found the opportunity to be in ArtPrize would give him the nudge to complete the project. His work is on view at Grand Rapids Community College’s Collins Art Gallery.

Sometimes handmade business partnerships start in the most unlikely ways.

… “What Marianne is leaving out… is that she basically had never made a terrarium in her life was very inspired and then decided ‘I’m going to start a terrarium business,’ stopped her job and started up Bird and Feather,” explained (Sean) Maginity, a Grand Rapids Community College grad.

Unfinished business: Sanderson Jr. picks up where Sr. left off

… Sanderson Sr. averaged a school record 10.7 yards per carry his junior year while electrifying fans at Memorial Stadium. But he suffered an injury early in his senior season and attended Grand Rapids Community College, where they changed him to a cornerback. He said he rebelled when moved and only lasted one season before returning home.

GRAND RAPIDS, MI — The Grand Rapids Area Chamber of Commerce Political Action Committee (PAC), the Friends of West Michigan Business, endorsed Friday, Sept. 2, for the first time in the races for the Grand Rapids Board of Education and Grand Rapids Community College Board of Trustees.

When asked about his views on human rights and the LGBT community, Carter schooled the crowd at Michigan’s Grand Rapids Community College with some of his Christian theology.

Seasoned chemist on the staff at Grayling High School

As a chemist who reached commercial success at the top of his field, Dr. Greg Schmidt could have punched his ticket to anywhere in the world to take a step up the career ladder, but there is no other place he’d rather be than in high school.

… Schmidt served as adjunct professor at Grand Rapids Community College, where he learned the gap between what students are taught in high school and what they are expected to know in college is huge for various reasons.

With over 174 venues participating in ArtPrize this year, five of them exist as exhibiting galleries year round within the ArtPrize boundaries.

… The annual survey announced Tuesday, Sept. 23, will remain open for approximately three weeks. Results of the survey will be shared in December 2014. Paskewicz, hired in July 2009, is a candidate for the Grand Rapids Community College Board of Trustees but intends to remain superintendent if elected on Nov. 4.

ArtPrize 2014 opens September 24 and runs through October 12. Before you complete your ballots, be sure to stop by GRCC’s two venues: Spectrum Theater and the Collins Art Gallery.

The Collins Art Gallery, on the fourth floor of the Main Building, will be open additional hours during ArtPrize: 5-8 p.m. Mondays through Thursdays, noon to 8 p.m. Fridays and Saturdays, and noon to 6 p.m. Sundays. Learn more about the art you’ll find there by clicking here.

The Spectrum Theater lobby will be open 1-8 p.m. Mondays through Thursdays, noon to 8 p.m. Fridays and Saturdays, and noon to 6 p.m. Sundays. For a preview of the pieces displayed there, click here.

Do you know somebody with a GRCC connection who has an ArtPrize entry? Let us know by emailing communications!

ArtPrize 2014 opens September 24 and runs through October 12. Before you complete your ballots, be sure to stop by GRCC’s two venues: Spectrum Theater and the Collins Art Gallery.

The Collins Art Gallery, on the fourth floor of the Main Building, will be open additional hours during ArtPrize: 5-8 p.m. Mondays through Thursdays, noon to 8 p.m. Fridays and Saturdays, and noon to 6 p.m. Sundays. Learn more about the art you’ll find there by clicking here.

The Spectrum Theater lobby will be open 1-8 p.m. Mondays through Thursdays, noon to 8 p.m. Fridays and Saturdays, and noon to 6 p.m. Sundays. For a preview of the pieces displayed there, click here.

Do you know somebody with a GRCC connection who has an ArtPrize entry? Let us know by emailing communications!

… For example, remediation is required of students who score less than 18 on the ACT and then perform poorly on Grand Rapids Community College’s Accuplacer placement test.

At least eight Cincinnati-area artists have been invited to create work for ArtPrize, the 19-day celebration of public art in Grand Rapids, Michigan, this fall.

The Art Department is excited to announce that the annual Photo Student Exhibition is currently on display in the GRCC Paul Collins Art Gallery, located on the fourth floor of the Main Building.
This year, the exhibition is presented in a new format. The works of more than sixty photography students are exhibited in high definition projection. The loop of images and videos which repeats every 25 minutes is stunning!

AWERIAL, South Sudan — Phillip Madol once studied in America as one of Sudan’s “Lost Boys” who fled bloodshed and famine. This week he was again caught up in a war as he helped his family flee a town that rebels had overrun in South Sudan.

… Madol, who previously studied at Grand Rapids Community College in Michigan, returned to South Sudan a couple of months ago after hearing his mother was sick. Her health problems are worse now: She was shot and broke a leg in this week’s violence in Bor.

(Article doesn’t mention it, but Chief Belk was one of GRCC’s 2013 Distinguished Alumni recipients.)

… Wharton, a Grand Rapids Community College graduate who was born and raised in Grand Rapids, recently moved to Los Angeles to pursue a career in physical fitness training and chase his dream of stardom.

CASCADE TOWNSHIP, MI — The grand plantation-style mansion at 6801 Burton St. SE is past its glory days of the late 1990s, when philanthropist Leslie Tassell tended zebras and peacocks among the formal gardens and grounds that covered 95 acres.

Things to do on Sunday, January 12

GRCC’s Collins Art Gallery is hosting the official opening and a reception with artists Rachel Girard Reisert and Tracy Longley-Cook from 5-7 p.m. today.

Both are from the Cincinnati/Dayton area and will talk about their photography-based work. Please join us for the reception, and bring your students! Great food will be served!