The earthquakes keep rolling in to GRMI!

August continues to be a seismically busy month. GRMI picked up 3 notable earthquakes in the past week. You may not have heard about the magnitude 8.2 earthquake near Fiji on August 19th. That is because, at a depth of 563 km, this “deep-focus” earthquake was too distant to cause any damage on the surface of the Earth.

You may have heard of the widely felt  magnitude 7.3 earthquake that shook Venezuela on August 21st. Large earthquakes are relatively rare in this region and this is the largest historic quake within 250 km of the surface in the last century. Fortunately, this earthquake was also relatively deep (123 km) and caused little damage.

Finally, on the morning of August 22nd, a magnitude 6.2 earthquake was generated on the seafloor off the Oregon coast. The earthquake appears to have been generated where the tiny Juan De Fuca tectonic plate (which is being subducted or shoved under the North American continent) is sliding past the huge Pacific plate. Despite being just 10 km below the sea floor, there was no tsunami generated.

If you are interested in earthquakes recorded by the GRCC seismometer, you can find them on the MIQuakes website. 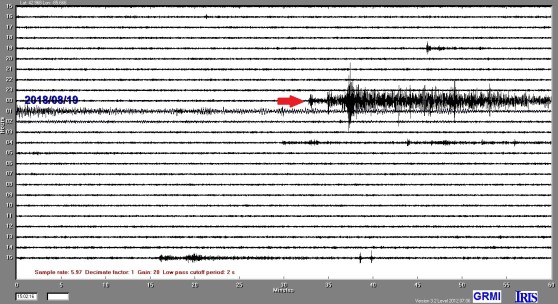 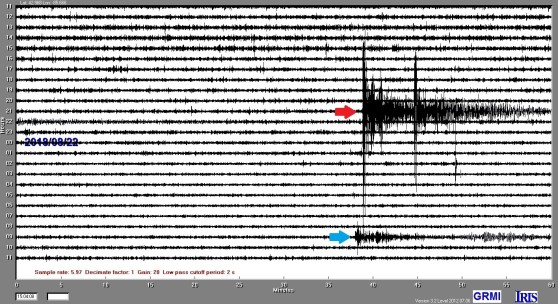 GRCC’s seismometer — GRMI — has picked up four earthquakes so far this month that were equal to or greater than magnitude 6:

On Aug. 5 at 11:46 a.m. Coordinated Universal Time, a magnitude 6.9 earthquake was generated near Pulau Lombok, Indonesia.  Our seismometer recorded the earthquake 20 minutes later — the red arrow shows the arrival of the primary wave:

On Aug. 12, GRMI picked up two earthquakes —  a magnitude 6.4 and 6 —  both from northern Alaska. The primary waves from the Alaska earthquakes only took six minutes to arrive at the GRMI station. 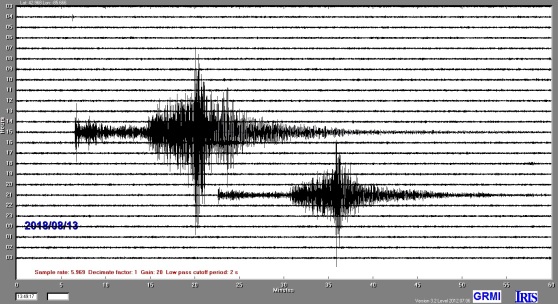 Finally, on Aug. 15, a magnitude 6.6 earthquake shook the Tanaga Volcano in the Aleutian Islands and was picked up by GRMI 10 minutes later. 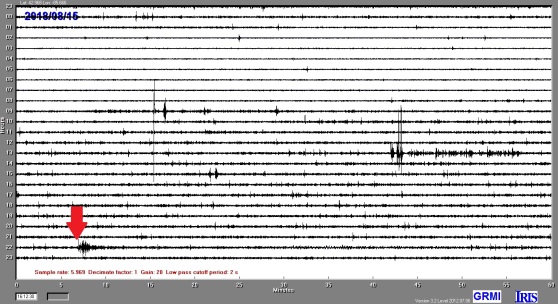 The dramatic events taking place in Hawai`i manifested here in West Michigan as the GRCC seismometer (GRMI) recorded the magnitude 6.9 earthquake on the Big Island of Hawai`i. On May 1st, a series of earthquakes heralded an intrusion of magma into the lower flanks of Kilauea Volcano on the Big Island. Cracks and fissures opened in Leilani Estates, a subdivision close to the town of Pahoa, which was previously threatened by lava flows in 2014. On May 3rd, lava began erupting from fissures in Leilani estates and to date, have destroyed 35 homes and forced the evacuation of over a thousand residents. Earthquakes generated by this activity include the magnitude 6.9 earthquake, recorded by GRMI. This is the largest earthquake in Hawai`i since the 1975.

For more information about the earthquake go to the Incorporated Research Institutions for Seismology.