ZEELAND — Morgan Beers was a force in front of the net.

BENZONIA — The Benzie Area Symphony Orchestra (BASO) will launch its 2019 summer season with a stunning performance by talented local musicians.

MUSKEGON – The Michigan Irish American Hall of Fame has announced its 2019 class of inductees.

… The Saugatuck senior signed with Grand Rapids Community College in late May.

What are you looking forward to now that you’ve graduated?

… “I’m going to college at Grand Rapids Community College to be an ultrasound tech.” — Caroline Pannyasee

Thanks to local futurist, Mary Brown, Singularity University (SU) is establishing a chapter in Grand Rapids, one of 142 chapters in 66 world locations recognized as up-and-coming technology centers. SU had been on Brown’s radar for some time. After attending its Global Summit, she submitted an application in hopes of starting a Grand Rapids chapter. Because Grand Rapids is recognized as an emerging center of innovation, the chapter application was approved.

… SingularityU Grand Rapids team members include Brown, the chapter ambassador, and Jan Mathorne, owner of HUCAPA – Human Capital Partners, an executive search consulting firm based in Denmark, Michigan, and California. Brown, a futurist, focuses on ethical adoption of AI in healthcare and society via human-centered design and organizational change and learning. A former senior digital experience analyst at Priority Health, she currently serves as senior consultant for learning and development in Spectrum Health’s Inclusion and Diversity department and as adjunct faculty at Grand Rapids Community College in the psychology and business departments.

MACKINAC ISLAND — Education reform took center stage at this year’s Mackinac Policy Conference, the annual gathering of the top business and government leaders in Michigan organized by the Detroit Regional Chamber of Commerce.

… Grand Rapids Community College President Bill Pink spoke at the Mackinac Policy Conference about a statewide decline in graduation rates, a lack of available training for skilled trades, and decreased rankings in math, reading, and science. He was joined by Detroit Regional Chamber President and CEO Sandy Baruah and former Florida Gov. Jeb Bush. During his tenure as governor, Bush was an advocate for school choice, including school vouchers and charter schools.

May 31, 2019; Center for the Advancement of Foodservice Education

Grand Rapids Community College (GRCC) culinary students will reap the sweet rewards from a partnership with a local theatre company, Broadway Grand Rapids, and the generosity of theater patrons.

GRAND RAPIDS, Mich. (GRBJ) – An alliance of Grand Rapids city staff, nonprofit and business organizations is reaching out to the community to gather ideas to reduce violence among youth.

From Grief and Recovery to Graduation

The world as Sparta senior Miguel Vazquez knew it changed on December 5, 2018.

… After graduation, Miguel plans to attend Grand Rapids Community College to complete his general education requirements and then pursue a degree in electrical engineering at Grand Valley State University.

IONIA — Dion Sower knew it was time for a change in his role as he approaches his 17th year with the Ionia County Sheriff’s Office.

After earning a pre-social work degree, Bawi Sung felt whatever career she found next should center on helping her fellow Burmese orphans and refugees.

… Aceu Thawng, who immigrated to Grand Rapids in 2008. Anu then earned a pre-social work degree from Grand Rapids Community College.

GRAND RAPIDS, MI – Grand Rapids Community College announced Tuesday, May 14, the public phase of its $15 million fundraising campaign for student scholarships and facilities that are more conducive to 21st-century teaching and learning.

The fundraising campaign is called “A Broader Vision,” and it’s an effort by Grand Rapids Community College leaders to raise “the final $3 million of a $15 million plan to increase scholarships” and renovate two buildings on campus, according to a release.

Attracting four-year students for the summer

Whether it’s because of the lower tuition, the ability to gain credits while living at home, a particular course they want to take, or a preferable option to a summer job, an increasing number of four-year college and university students have been enrolling at community colleges during the summer to take a course — or two or three.

… The number of “guest students” at Grand Rapids Community College (GRCC) in Michigan increased nearly 80 percent between the advent of its summer marketing push in 2011 and last year. In 2018, 1,374 students from other colleges and universities took GRCC summer courses, nearly a quarter (22 percent) of all students enrolled.

BELDING — Aerospace engineering and worship ministry are the planned college majors for the top two students academically in the Belding High School Class of 2019.

… (Vivian) Gay, 17, is the daughter of Robert and Nadine Gay. She plans to attend Grand Rapids Community College before transferring to Grace Christian University for worship ministry. Going to Grace would be a dream for Gay, she said, with a goal of becoming a worship leader.

Local educators and students weighed in on the proposed revision of State Social Studies Standards — under debate and hotly contested for the past five years — during a session hosted recently at Kent ISD by the Michigan Department of Education.

… Gertrude Croom, retired Grand Rapids Community College professor, said she attended because of a concern for Michigan students overall, and spoke about the global economy they need to work and live in.

GRAND RAPIDS, MI – As the Heritage Hill Association celebrates the 50th anniversary of its annual home tour this weekend, organizers are bringing back a Georgian mansion that was a star attraction on the first Heritage Hill tour in May 1969.

… Advance tickets are $18 and are available on the Heritage Hill Association website, as well as the Heritage Hill association office at 126 College SE, Family Fare and D&W stores, Lake Michigan Credit Union branches, Martha’s Vineyard and Art of the Table. Day of tour tickets are $25 and are available at the ticket booth at the GRCC DeVos Campus, 435 East Fulton St. Children under 12 are admitted free.

… King’s mother said he planned to go to Grand Rapids Community College and become an architect.

Today I will talk with Cheryl Edwards-Cannon, Author of “Taking Care of Miss Bee Bee.”

Cheryl Edwards-Cannon is the CEO of President of Clear Path Choices, LLC, a consulting company that helps families to make informed end-of-life decisions. She holds a Master of Management degree from Aquinas College, a Bachelor of Science degree from Central Michigan University and a Certificate in Gerontology from Grand Rapids Community College. She is an adjunct faculty member at Grand Rapids Community College in the Social Sciences Department. ~ Lee Stephens

Dr. Korson is a Rockford native and alumna of GRCC, and she will speaking on separatist movements with special reference to the French dependency of New Caledonia in the South Pacific. The lecture is a collaborative effort between the World Affairs Council of Western Michigan and the GRCC Social Sciences Department. World Michigan provides some information concerning Dr. Korson’s talk.

The Social Sciences Department would like to send a thank you out to Destiny Swanson and all the catering group for being so willing to help us out at the last minute! We appreciate all that you do for us and the college. Thank you!

A panel of experts will lead a discussion of the marijuana legalization ballot proposal on Sept. 19 as part of GRCC’s Civic Engagement Week.

The presentation, from 3-4:30 p.m. on the Student Center’s second-floor multipurpose room, will include time for students’ questions. The discussion will be of special interest to Social Sciences and Criminal Justice students.

State voters will decide Nov. 6 whether to legalize recreational marijuana. The Sept. 19 discussion, presented by the Student Life Office, will center on drug education and civic engagement.

We extend our condolences to the family and friends of former History Professor and Social Sciences Divisional Chair, Jim Bogdan (Fr. Jim), who has passed away. Jim served GRJC/GRCC from 1959 until his retirement in 1993.

Professor Keith St. Clair will be giving a lecture on Qatar and his visit there. If you find this topic interesting and/or this topic is relevant to your class, please try to attend and bring your class. All are welcome.

Qatar’s wealth and international ambitions have raised the ire of Saudi Arabia and resulted in its recent isolation on the Arabian peninsula. Keith St. Clair has recently returned from Qatar and will explain the history, causes, and prospects for Qatar’s ostracism in Arabia.

… Westside Social will eventually be handed down to DiLeonardo’ oldest son, Anthony, 23, a graduate of Secchia Institute for Culinary Education at Grand Rapids Community College. He’s a sous chef at the restaurant, working alongside head chef Bob Huynh, whose resume includes Green Well and Nonna’s: The Trattoria in Ada.

Global health, the defense budget and Putin’s Russia are just a few of the topics  the World Affairs Council of Western Michigan will explore during their 2018 discussion series.

One of the finalists for the 2018 Visionary Award from Lakeshore Advantage was Holly Johnson, president of the Grand Haven Area Community Foundation, for her work with the Housing Next initiative.

Dictators using digital media, global health, the future of American global leadership, the defense budget and Putin’s Russia are some of the dynamic topics being explored as the World Affairs Council of Western Michigan launches its 2018 Great Decisions Global Discussion Series. 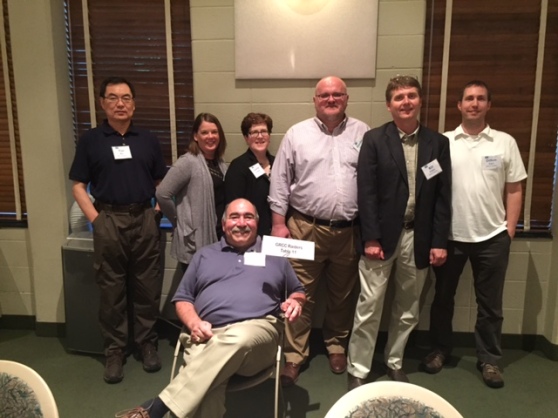 Don’t forget the Social Sciences’ Conversation Human Trafficking: Modern Day Slavery is happening tomorrow (Thursday, April 20th). The event starts at 6pm and will be held in 108 Sneden Hall. The event is open to all and free of charge. 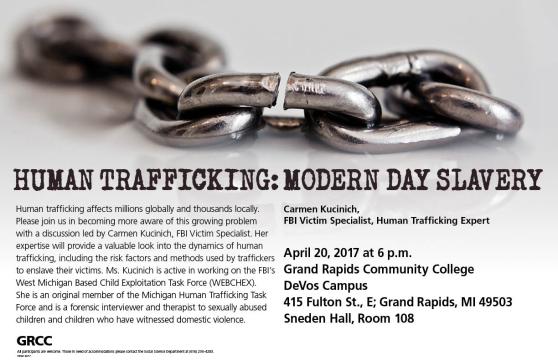 Ben Gerlofs, a former president of GRCC’s chapter of the International Geographical Honor Society (GTU), has accepted an appointment as a Visiting Assistant Professor of Geography at Dartmouth College, which houses the only Geography Department in the Ivy League. Ben received his BA at Aquinas College and MA at Syracuse University.  His research on an edge city in Illinois was published in the peer-reviewed journal, Urban Geography, and he is currently at Rutgers University in the final stages of completing his Ph.D dissertation, which is devoted to Mexico City. Last week, Ben presented a paper at the American Association of Geographers Annual Meeting in Boston titled: “Resisting Postpolitics in Mexico City’s Avenida Chapultepec.” Geography alumna Stacey Murphy, now studying at Aquinas, and April Shirey, the current GTU president at GRCC, co-authored a paper that was also presented at the Boston meeting: “Food and Housing Insecurities in Michigan Community Colleges: What can Geography Students do?” The conference is the largest annual gathering of geographers worldwide.