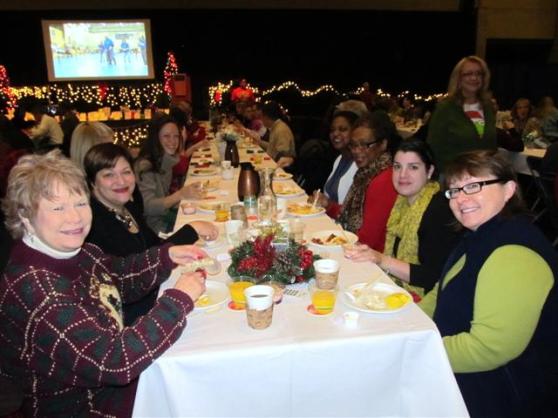 Last week colleagues at GRCC joined together for the annual Holiday Breakfast, and merriment ensued…

The following video is a marvelous holiday story about how departments can work together to create a Gingerbread Village! The Manufacturing, and Mechanical and Architectural Design Departments worked together to create reusable patterns for gingerbread houses used in the Culinary Arts program. This is a wonderful example of an interdisciplinary project involving several departments.

Tony Annese, who guided the Grand Rapids Community College football team to an undefeated record this fall, has accepted the coaching job at Ferris State University, he told The Press this morning. An Ferris State spokesperson confirmed Annese’s hiring. He is scheduled to be introduced at a 2 p.m. news conference today in Big Rapids.  (More)

Upon arrival at his Breton Village Mall Christmas train display, Herb DeVries was ready to tinker — a locomotive had crashed, another was un-cabled and two had lost power. While children watched with delight at the chugging engines winding around the magical scene, DeVries, 79, of Kentwood, examined what needed fixing. It’s the labor of love for which he’s served as the on-call engineer for more than 20 years. […] A retired Grand Rapids Community College physics professor, Herb DeVries still finds the machines fascinating. (More)

MOUNT PLEASANT – Cody Kater is finally coming to Central Michigan University … again. Kater signed a letter of intent to play football for the Chippewas, completing a circle that began with his original verbal commitment to CMU. […] After redshirting a year at Cincinnati, Kater transferred to Grand Rapids Community College, quarterbacking the team to an 11-0 record. He completed 157 of 230 passes for 2,218 yards and 19 touchdowns.  (More)

As the first step in enacting the terms of a formal contract signed in October, officials from the Ionia County Economic Alliance (ICEA) and The Right Place, Inc. (RPI) announced today the hiring of Jennifer Wangler, an economic development professional and Right Place employee who will serve Ionia County exclusively. […] Wangler brings more than a decade of business and workforce development to her new role. She most recently served as a business services professional for Grand Rapids Community College for which she called on area manufacturers as part of a larger economic development team.  (More)

The Raider Grille will operate during its normal hours from Tuesday, January 3rd through Friday, January 6th.

The Quiet Cafe and The Sneden Cafe will be closed, until Monday, January 9th when Campus Dining resumes its normal business hours.

Thank-you for your continued support and have a very Happy Holiday Break!

As part of the Windows 7/Active Directory upgrade, Auto Archiving for GroupWise e-mails will be temporarily be turned off. This will take place on December 22nd and remain off for the length of the project(Estimated to be April). E-mail will continue to stay in your in box for 183 days, at witch time they will auto delete unless you manually archive them. For instructions on how to manually archive your email see this help desk knowledge base article.

All student, staff and faculty now have the ability to reset their own Network/Blackboard passwords. It is no longer necessary to contact IT Customer Support for this service. (Password changes for PeopleSoft systems will still require manual assistance.)

From any web browser, visit grcc.edu/pwd and complete the password reset process. Links to this tool are now on Blackboard and IT Customer Support websites.

So long and fare well…

I would like to take a moment out of this busy season to thank everyone for all the help, assistance, cooperation and friendship that I have received these past years here at GRCC. As many of you know, I will be retiring at the end of this month. On January 1st, after 37 years in law enforcement, I will become a private citizen. I’ve decided it’s time to start new adventures.

I have so many fond memories that I will be taking with me.

Again, Thanks to everyone.

I hope everyone has a Happy (and safe) Holiday season.

We’ll see you around the next bend.

GRCC is done collecting United Way Pledge forms, and here are our results:

Total Amount Pledged: $39,506
Total Number of Participants: 198 (Not including bidders from the Auction)

On behalf of the United Way Campaign volunteers – great job, everyone and thank you for your contributions!

Some of the new programming includes: Kuyper Business Lunch with Author Bacote, Kuyper College Book Launch, Armen Innovation Award at GRCC, Psychology Lecture Series: Micro-aggressions, Music for the Holidays, and the GRCC Chemistry Lecture Series featuring Lynn Kukin which (like many of the other programs) is available streaming online or on YouTube:

Musicians and acquaintances call him “The Colonel.” At first glance, there is absolutely nothing military-like about Michael Crittenden’s wry smile, rumpled garb and laid-back demeanor. […] After high school, Crittenden briefly attended Michigan State University and Grand Rapids Community College while working and “doing a lot of socializing.”  (More)

KALAMAZOO — For all the talk about the need for job creation, Sheri Welsh said one of the biggest frustrations she faces as head of a job-placement company is the lack of qualified candidates for open positions. […] Steven Ender, president of Grand Rapids Community College, said a major issue is many high school graduates are not ready for higher education. He said his institution enrolls a third of the high school graduates in the GRCC service area, and slightly more than half need at least one remedial class.  (More)

GRAND RAPIDS – The Arts Council of Greater Grand Rapids has awarded $28,100 in grants for local arts and cultural organizations. Christmas comes early for 12 groups in West Michigan, funded through the Michigan Council for the Arts and Cultural Affairs. […] The 12 funded groups are: Grand Rapids Community College – $3,984 (More)

Josh VanOveren was behind the wheel, driving back to Grand Rapids from Kentucky. Next to him was his 3-year-old daughter, Angelina Elizabeth. Waiting for him was his grandmother’s house, where he and Angelina could live rent-free. Behind him, he hoped, was the substance addiction he’d battled for years. […] VanOveren had great potential as a chef. Growing up in a church-going, musical family, he studied cooking at the Kent Career Technical Center and at the Culinary Institute of America in New York. He has a culinary management degree from Grand Rapids Community College.  (More)

GRAND RAPIDS — In 2005, when it came time for Terrell Daniels to locate an office for his security systems contracting company, he could have selected a site in any of the neighborhoods around greater Grand Rapids. […] Pride, this year, has completed about $600,000 worth of projects, including a joint contract with Rockford on the renovation of Warren Hall at Grand Rapids Community College.  (More)

One of the candidates who is being rumored to be in line for the Ferris State University football head coaching position is Tony Annese, the current head coach at Grand Rapids Community College and a former high school coach in the Grand Rapids area.  (More)

The pressure to win isn’t exclusive to NCAA Division I-A football. It exists everywhere, including the D-II level, where coach Jeff Pierce was fired last month despite the Bulldogs posting a winning season and Pierce reaching a milestone with his 100th victory at the school. […] Tony Annese, former high school coach at Jenison and Muskegon and current Grand Rapids Community College coach, is expected to emerge as one of the leading candidates for the opening.  (More)

Michigan is going great guns on reforming its K-12 system along the lines suggested by the College Board. But improving access and affordability to preschool and higher education? Not so much. […] Reducing the college dropout rate was a main topic of conversation at Monday’s forum, with the presidents of Western Michigan and Ferris State universities and Grand Rapids Community College all agreeing that more can and should be done.  (More)

Over 900 new students are scheduled to begin the 2012 winter semester!

On January 9, 10, 11 volunteers are needed to staff Student Information Stations on the Main and DeVos Campus. As faculty and staff, we are one of our finest resources who make a difference in the lives of new students during their first few days on campus. The time commitment is flexible, and the benefits to news students are invaluable.  The proud sponsor of the stations is Lake Michigan Credit Union.

To Volunteer – select your volunteer location by clicking on the appropriate link below:

Select the day and date by clicking on the tab at the bottom of the spreadsheet. Enter your contact information next to the time you desire and it will auto save A confirmation appointment will be sent to your calendar.

A new password policy has been developed to help keep information safe here at GRCC. This policy will make it more difficult for passwords to be guessed or cracked and will provide greater information protection. The policy will require a stronger password consisting of at least 10 characters including one upper case letter, one lower case letter and a number. Beginning January 1, 2012 the IT department will provide a self-serve password change website that will adhere to these new requirements.

More details on this policy can be viewed at http://grcc.edu/itpolicy

The Grand Rapids Griffins and Grand Rapids Community College Alumni Relations are teaming up to offer a fun night of entertainment. Come join the Griffins as they take on the Lake Erie Monsters.  Special Ticket Offer: Lower Level Face-Off tickets are only $15 (originally $20), $1 Beer and $1 Hotdogs available from 6-8pm

Alumni encouraged….everyone welcome!  If you have questions, please contact Erin Cisler at x3931 or ecisler@grcc.edu.

Reminder from Purchasing: Per the following excerpt from the Purchasing policy, please remember to report gifts received this holiday season.

“The Board of Trustees and College employees are prohibited from accepting personal gifts from suppliers exceeding a value of $25. Personal supplier gifts exceeding $25 must be reported in writing to the Director of Purchasing.”

Please contract Purchasing at x3851 or x3853 if you need a form. Please return completed forms to Purchasing no later than Monday, January 9, 2012.