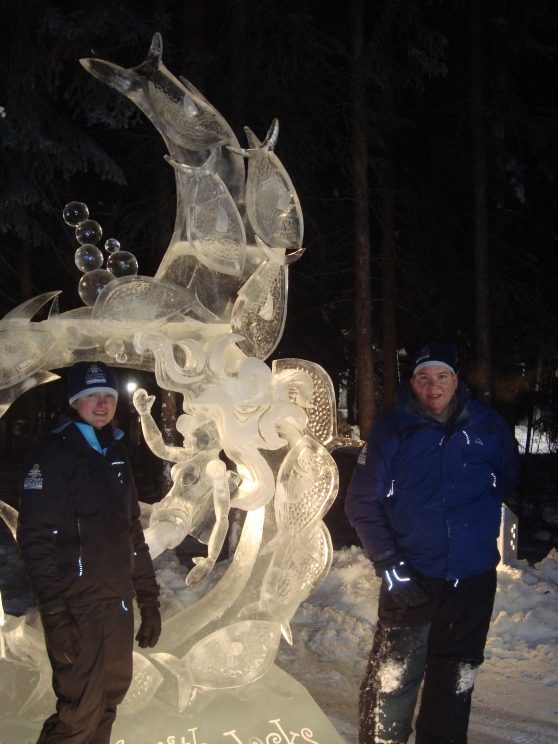 Congratulations to GRCC’s ATC Head Banquet Chef Luba Petrash and GRCC Alumni Stephan Koch on placing eighth out of 28 teams in the World Ice Art Championships in Fairbanks, Alaska in the “Single Block – Abstract” category. The two competed against teams from around the world (a Russian team took first place) in carving 8′ x 5′ x 3′ blocks of ice into works of art.

Fascinating facts about the competition:

Not only does Luba oversee the delicious food at the ATC, she also teaches an ice carving class as an adjunct faculty member of GRCC’s Secchia Institute for Culinary education and is a former coach of GRCC’s Ice Carving Team.

Stephan Koch is an alumni of GRCC’s culinary program and owns his own ice carving business in Indiana; the “Indiana Ice Studio” (http://www.theicestudio.com/).

Congratulations to Luba and Stephan for putting GRCC on the world stage!

The deadline for submission of grant applications for the Instructional Improvement & Professional Development (IIPD) program is 4:30 p.m., March 25, 2011. Please note that the IIPD Guidelines and all application forms have been revised . The revised application packet and Guidelines are available in the IIPD and SSPD Grants section of the Grants Office website at www.grcc.edu/grants. Applications should be delivered to the GRCC Foundation Office, 1st floor, College Park Plaza. If you have any questions about IIPD grants, please contact Judith Larsen, Director of Grants and Resource Development at 234-3910 or at jmlarsen@grcc.edu.

Why are you waiting around in the morning watching a scrolling marquee on your TV to find out if GRCC is open or closed?  Sign up for emergency text message alerts!

Getting notification via text messages is superior to using the local media – here’s why:

Using Rave Wireless, you can opt to receive either a text message OR an email OR BOTH.  (The college is also looking into providing robo-calls as yet another option).

GRCC will still notify the local media for those who don’t have Internet Access or Cell Phones – but the Emergency Planning Team wants to make sure you have access to this information as quickly as it can be provided.

On Monday, March 14th, Mark Nottley will present to the GRCC union employee groups an overview of his work on the compensation study.  His presentation will be in 168 ATC (Auditorium) and will be held from 10:30am – noon.  This session is open to any employees who wish to attend.

(We will ask our Media department to record the session for those who are unable to attend.)