The DAAPP supports student and employee awareness, education, and coordinated programming for drug and alcohol prevention. This covers training, compliance notification, policy review, and programming based on an established timeline.

Over the last year we have: 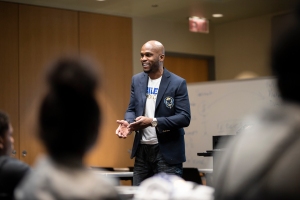 The award, which was given today during the organization’s annual “Fulfilling the Dream” luncheon, recognizes outstanding service in demonstrating and implementing Scouting ideals for youth from rural or low-income urban backgrounds.

Fields is being honored for his work with ABO, GRCC’s leadership development program for inner-city men. Members of ABO, which is funded by the Wege Foundation, work with mentors on strategies for success in college, career and life. They also have access to one-on-one tutoring, workshops, study tables, and math and writing groups.

The other recipient of the award, Autocam Medical CEO and President John Kennedy, also has strong GRCC ties. Autocam teamed up with GRCC and other area companies to form the Advanced Manufacturing Program in 2012. Participating companies work with GRCC to determine the AMP curriculum and schedule. All the AMP “classes” are run in a cohort fashion, with classes scheduled and reserved specifically for students in the program.

Kennedy is being recognized today for his work in starting a reading initiative in the Grand Rapids Public Schools.

“Dr. Fields and Mr. Kennedy are powerful examples of what outstanding service looks like,” Aaron Gach, Scout executive and CEO of the President Ford Field Service Council, said in a press release. “They have each championed initiatives that will have a positive and lasting impact on our community’s youth.”

Counseling & Career Development is presenting a series of Mind-Body Wellness events this Fall. These events are intended to promote student wellness, particularly their mental and emotional health and resiliency. We’re trying out some new offerings and formats this semester, including weekly mindfulness meditation and tai chi activities, as well as brief talks with nutritious snacks. These will be held at a variety of locations across campus. The September flyer is below; the events are also listed on the Raider Connect platform, where students can RSVP (not required, but helpful!).

The Education Department hosted a Teacher Education Seminar on Tuesday, April 10. The seminar focused on “Managing Anxiety In and Out of the Classroom” and was a success with an impressive turnout. A big thanks to GRCC counselor Reuben Mwangi for his excellent presentation on this relevant topic!

As part of GRCC’s SAMHSA Suicide Prevention Grant, we would like to invite all current and active student organizations on campus to sign up for the QPR gatekeeper training. It is important to keep in mind that suicide is the second leading cause of college students deaths by suicide. With that said, we invite members and advisors of student organizations to reserve one hour of their time to come with an open mind, address some of the stigma around this sensitive yet immediate issue, become informed of the various warning signs that exist, and learn about some on campus and community resources available to you, GRCC students.

If you are interested in receiving this training, please email grant coordinator Hilda Martinez-Gutierrez at hgutierrez@grcc.edu. She looks forward to connecting with all of the diverse student organizations on campus.

Special thanks to the community partner agencies and campus student organizations, listed below, that attended the Mental Health and Wellness Resource Fair on Oct. 23! On behalf of the SAMHSA Grant, Grand Rapids Community College appreciates your time and participation and hopes to see you all next year! 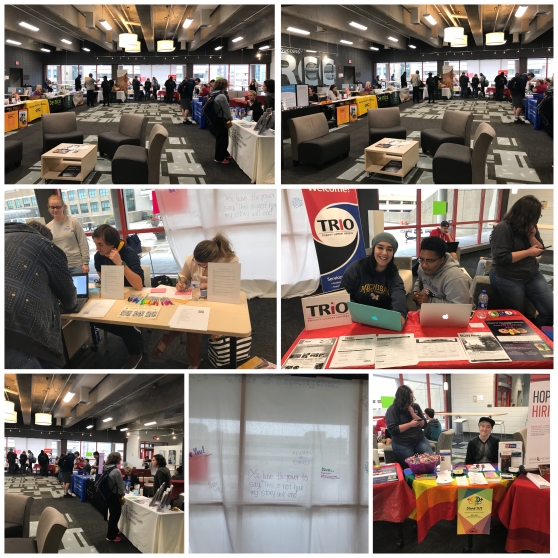 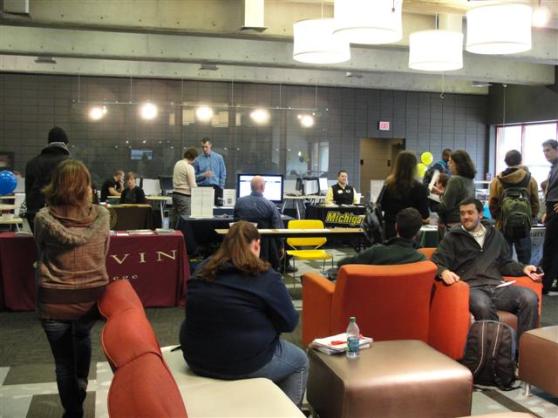 The goal of the Mental Health and Wellness Resource Fair is to raise awareness among students about mental health resources and to encourage them to seek help when they hit roadblocks or have a life crisis that is creating barriers to their success.

A Raider Salute from Erin Busscher, of the Counseling and Career Center:

I would like to send a Raider Salute to all of the outstanding Facilities staff for setting up and tearing down the Transfer and Advising Day event in the Juan Olivarez Plaza. They did an excellent job and I was impressed by their teamwork and efficiency.

GRAND RAPIDS, MICH. – If you’ve ever needed an excuse to try a new restaurant, or an old favorite, Restaurant Week Grand Rapids is it!

On Wednesday, June 28, over 600 people gathered at Celebration Cinema South to watch two screenings of America Divided, a film series that explores some of America’s thorniest issues — criminal justice, housing equity, education, immigration, voting rights, labor, Flint’s water crisis — by telling the stories of the people who get caught on those thorns.

… Dr. Andre Fields, counselor at Grand Rapids Community College, spoke about shared responsibility for the situation Grand Rapids finds itself in as the second worst city in the nation for African Americans. He said, “White people have downloaded a superiority complex. Until they unlearn that superiority, they’ll have a hard time having racial empathy. On the black side, we have to unlearn that internal sense that I cant overcome racism and build the life that I want. We have to take responsibility for our homes, our churches, our neighborhoods.”

The following departments have returned to their location on the 3rd floor of the Student Center:

The Academic Advising & Transfer Center is on all “open advising” until Sept. 1  in order to see more students.  Open advising means students are seen in the order in which they check in at the front desk.  Students are encouraged to come earlier in the day as they tend to get very busy with longer wait times after 11 a.m.

… After a stint at the Secchia Institute for Culinary Education at Grand Rapids Community College he landed at Gibsons. “I had a great experience there,” he said. “I started refining my technique and learning about high quality ingredients.”

Inside Track: Building a brotherhood

Andre Fields knows firsthand the painful combination of poverty, fatherlessness and systemic racism that haunts many of his black male students.

Some GRCC service offices will be open late on Tuesdays during the summer: